We barreled down the long desert highway, wipers straining against wind and rain gusts, holding tight to the center of the road against the onslaught of semis streaming from Mexico, our 8-foot wide trailer on a 12-foot wide road meeting oncoming truck blasts with unwavering tenacity. Through rain-streaked windows we perceived millions of Saguaros jutting up from the verdant landscape, their protuberant arms poised in an anthropomorphic interpretive stance. 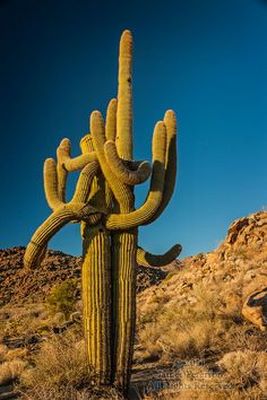 This is no barren habitat, for your mind hears the call to join in symbiotic dance. Saguaro, so abundant here, live in balance with the earth through a lifeline much longer than ours. Single 15- to 20-foot high stems don’t grow their recognizable arms until they reach the age of around 95-100, and those with five arms have developed until at least the age of 200, and stand up to 45-70 feet tall. The Saguaro is not only a master of disguise and trickery but also of water engineering and conservation, saving liquid deep inside its core during rainy periods and expanding and contracting as needed.

White knuckles ease up on the steering wheel and change in color to a flushed blush as the speed limit signs signal our entry into the small town of Ajo, just a short distance from the Mexican border. We suck in the sights at 25 mph: Chevron gas station, colorfully adorned adobe homes brightly painted and many with unique bas-relief art, Mexican Insurance, sheriff’s SUV, closed gas station, Mexican Insurance, closed restaurant, Border Patrol SUV, Mexican Insurance, laundromat, Border Patrol SUV, Mexican insurance, large grocery—probably the only one in town—Border Patrol again; okay, two open restaurants, Shell gas station next to our RV park destination. Something is different about the town despite the high percentage of law and border enforcement, and it will become clear upon the ensuing day’s adventures. The mysteriousness of this town will be revealed in an upcoming blog post.

We travel south toward the heart of the Sonoran Desert, unique in the Americas for its flora and fauna, into Organ Pipe Cactus National Monument to a secret spot recommended by an old woman in the Ajo Chamber of Commerce who, once upon a time, worked in the monument as a tour guide. We followed her instructions: “Go to mile marker X, past a wire fence, turn left, drive three miles on a rough dirt road, and prepare for a two-mile hike along a seasonal wash into a 19th century cattle homestead in the middle of a stunningly endless Saguaro vista.” Bumping along the dirt trackway, a strange break in the natural perspective caught our eye, a twenty-foot-high pole with a 360-degree infrared camera, long-range telecommunication capability, and a sign below beseeching those “in need” to push the button to report  “assistance” or observation of those who need Border Patrol ministration and deliverance. 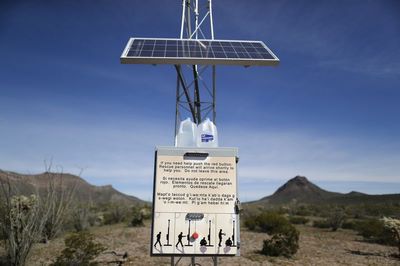 We took this to mean identifying illegal immigrants passing through, in need of Border Patrol rescue to find their way across the desolate desert into the “safety” of America’s arms.

Our hike brought us to the ruins of the homestead, and through this and immediately adjacent to it was the obscure, unpublished spot in the middle of the seasonal wash. We discovered metates formed in pre-history by Native Americans who ground the pods of mesquite trees for food with manos, or grinding stones, that left circular impressions over great periods of time. 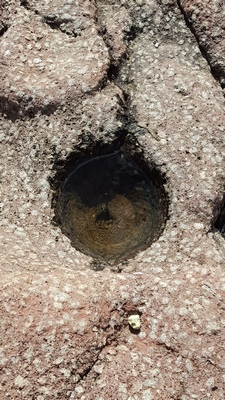 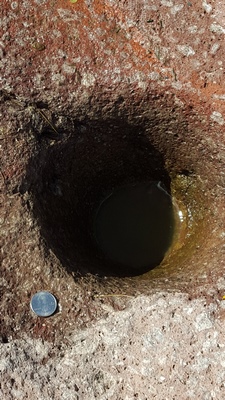 I found one such grind hole and felt myself transported in time to a moment where the heavy weight of a child burdened my back, sun beating down on my thick work-burdened body, a daydream to be shucked off to return thankfully to the present. These people, however, knew no borders. The land was theirs to be worked for survival and sustenance.

Driving to and from our magic hidden-in-plain-view destination, we passed though the Border Patrol check station on the lonely road between the town of Ajo and Mexico. A warning one mile before arriving prepares drivers for the eventual examination ahead. 65, 55, 45, 35, 25, 15, and 10 mph speed warnings across speed bumps into a narrow “cattle chute” to the waiting officer was enough to scare any would-be illegal alien into admitting guilt before the officer’s interrogation.

It was, we assumed, a racial profile interrogation in stages. Ruth’s blonde hair and blue eyes and my Anglo looks passed the superficial examination we presumed, but those outside these standards would have to face other more stringent tests such as vehicle searches, papers, visas, and other arcane standards. We surmised these Border Patrol officers differentiated those seeking the “Give me your tired, your poor…” Statue of Liberty covenant that drew millions seeking safety and promise in freedom, from those south-of-the-border illegal miscreants, crossing on foot, lacking the price of a ship steerage ticket. How many in our great country can claim with pride our family’s immigration story? What made them legal other than a desire to find freedom and opportunity on our shores?

We drove through the nexus of the dark side of the line between perdition and promise. Ruth rolled down the window to greet the twenty-something Border Patrol officer who asked us, “How it was going?” We responded with a flippant colloquial quip to certify our command of the English language, hence “probable citizenship” and were on our way, through false trial to an unknown uncertain security ahead.

It certainly is funny how a routine Border Patrol stop can make you feel like a suspect, because you are. It is a fine line of insecurity that gets challenged. We all take our “American way” of freedom for granted. I’m reminded of the time I worked as a contractor for the US Embassy refugee program in Thailand during the Cambodian, Laotian, and Vietnamese diaspora. I participated in countless refugee examinations, culminating in the final INS interview that determined “go or no-go” to America. Not only were those interviewed stressed and bewildered, but it felt as if I was on a roller coaster ride out of control. Many of the “grand inquisitors” were kindly and supportive, but a very few exhibited the megalomania, ego, and power-hungry sadism that is raising its head in government these days. One person in particular took great pride in breaking down the interviewed with his appearance in cowboy hat, fancy boots, and cute young refugee women who hung on his arm like remoras on a shark. He would examine families’ ear lobes for differentiation and look for cracks in their stories to exploit. He was greatly feared, and he played on it. Memories of these moments cross my mind every time I am confronted by those who walk the razor’s edge with their given power.

Now with these thoughts resounding in my head, we drove on past the check point and soon, looming ahead, breaking the stunning beauty of our desert panorama, a giant edifice appeared on the horizon like the black monolith in the movie 2001: A Space Odyssey. We slowed down to identify what could be placed in such an unlikely spot, like dropping a Manhattan office building in the middle of nowhere. The United States Border Patrol moniker shone back at us in huge imposing letters framed by shiny steel and glass, and a backdrop of a hundred or more official vehicles ready for action. 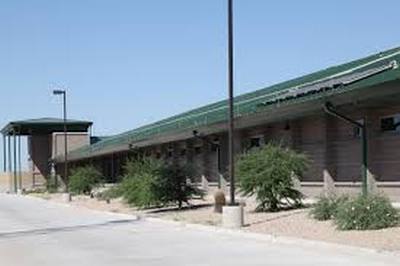 This was a giant middle finger on the landscape, paid for by the US taxpayer, probably under the auspices of George W. Bush. Every few minutes a Border Patrol vehicle would pass us at great speed—who in power needs to follow the rules of the masses? We looked at each other in wonder. How could this desolate place have such an overwhelming border enforcement presence? Okay, yes, there are the illegals, drug dealers, opportunists, and such seeking to suck the nourishing life force and deprive the opportunities of everyday you and me but—whoa! This was huge. And very soon, as we traveled on to our next destination, we quickly discovered more of these fortress-like structures within close proximity to each other…and they want to build a wall along 2,000 miles of the US/Mexico border..? As Pogo once spoke in the comic strip of yesteryear, “We have found the enemy, and it is us!”

Oh! Did I mention the Sonoran Desert in the title of this blog? This place is truly one of the wonders of North America, supporting flora and fauna unique to this region. If you look up the definition of desert, you will find a completely different meaning than imagined of this place. As I write, the sweet scent of creosote bush (not asphalt) wafts through the air. Bird sounds are everywhere. A brilliant red cardinal, overwintering here, just landed on a nearby cactus, building sustenance for the long flight north in spring. Yesterday’s dog walk put us close in proximity to a pack of yipping coyotes, and that of a day earlier to large family of javelinas (or more properly, peccaries) that look like small pigs.

Colorful butterflies flutter near branches of desert willow, near shaded hummingbirds sipping nectar from cactus flowers. Bees are abundant. The occasional kit fox crosses sandy trackways created by countless animal foraging. Evidence of crawling creatures is found in the tarantula and snake holes under shaded desert marigold, globe mallow, and brittlebush. Life is abundant and lives in the scale and scope of evolution from a much earlier geologic time when this region transformed from sea to savanna, to ice cap, to forest, and eventual desert. The timeline is unimaginable to us, who view life in the perspective of around 100 years. North America formed between 1.5 and 1 billion years ago from a planet that is around six billion, so let’s do the math, eh? That’s 15 million lifetimes. If we could speed up time like that simulated in the movie The Time Machine, change would boggle our minds, as matter materialized and dematerialized in a vertigo of imagination. Nothing is as it was, yet all share the same common materials recycled again and again, infinitely.

We had the opportunity to touch a meteorite displayed at the Arizona-Sonora Desert Museum just outside of Tucson, predating the formation of our sun and solar system, long before the earth was just a mass of glowing gases not yet congealed. It was composed of known elements, of course. I started to ask so many questions. Where did the water that sustains life come from on a planet originally composed of fiery gasses? And on and on. More about one of the most amazing museums I have ever visited in a later blog. I am asking a new question now: Will there ever come a time when borders and politics no longer separate people and opportunities from each other? Will we ever come to recognize that we all come from the same “stuff?” That when we view our earth from space, all matter is equally bound together in symbiotic embrace: viewed from the stars, are we not all conjoined elements?

Needless to say, we are in love with this place, rich in diversity and living wonder. Life is both abundant and endangered, some species are only to be found here in remote and protected areas. As Ruth quoted in an earlier blog post from Marshal South: “The Desert! Either you will love it, or you will hate it. If you hate it, you will fly from it, and never wish to see its face again. If you love it, it will hold you and draw you as will no other land on earth.” 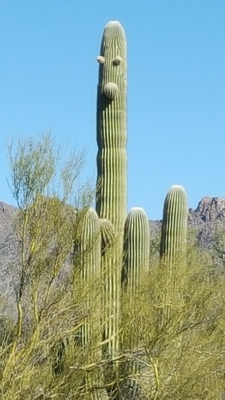 For more photos, check out our Instagram posts: @LyfsArt and @the_macriverse