The Anza-Borrego Desert is a 600,000 acre gem hiding in plain sight, nestled deep in the valley west of the Laguna Mountains and framed north and south by the Santa Rosa and Vallecito mountain ranges. It is the largest state park in California and the second largest in the contiguous United States. The park takes its name from Juan Bautista De Anza, an 18th century Spanish explorer who came into contact with the now rare Borrego, or bighorn sheep. Sensitive and observant travelers to this area discover the ancientness of this region that has transformed through the millennia from warm ocean waters through tropical forests, savannas, and woodlands. The fossil history richly reveals the lives of previous inhabitants such as baleen whales, salt and fresh water shells, clams, sea urchins, shrimp, shark, and—on the large end of the scale—woolly mammoths, much later in the timeline. Our earliest human ancestors in this region may have encountered the feared Smilodon or saber-toothed cat,

around the time of its extinction 10,000 years ago. It is believed that human contact contributed to their demise on earth; their fossils are to be found throughout this region and particularly in the La Brea Tar Pits, in Los Angeles.

Native Americans populated this area for thousands of years, leaving petroglyphic and pictographic records on rocks and in caves. 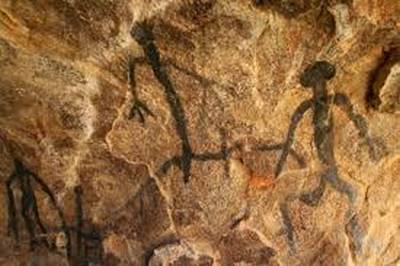 Leaving pre-history and entering the Hollywood era, humans were attracted to the mild desert oasis of Borrego Springs with its temperate winter weather just as they were to Palm Springs. The latter winter haven developed in popularity and population but Borrego Springs did not. Why? Roads play a big role in the growth of Palm Springs. There are major thoroughfares crossing it, providing easy access. Borrego Springs lacks easy in and egress with one more major block to growth, water. Borrego Springs relies on a natural aquifer for its water supply that is naturally replenished each year to the tune of 1.8 billion gallons. For decades the amount of water pumped out has far exceeded the replenishment, most recently 6.1 billion gallons a year.

Now, Borrego Springs is not running out of water per se: there are three aquafers stacked on top of each other. The crux of the problem lies in the cost to drill deep enough to access this precious commodity, making it economically infeasible to pull water from the ground. The popularity of the area meets economic reality—similar perhaps to the attempts to desalinate the ocean to make the desert thrive in the Middle East. In northern Borrego Springs, farms that produce grapefruits, lemons, tangerines, and palms have historical water rights to 70 to 80% of the water available; the rest is consumed by golf courses, resorts, and residents. I wonder if Borrego Springs is suffering from the same quandary that the Anasazi encountered when their resources could not keep up with the population growth.

There once was a halcyon time when both Palm Springs and Borrego Springs hosted the rich and famous of Hollywood. The Rat Pack, Marilyn Monroe, Clark Gable, John Wayne, Angie Dickenson, Burgess Meredith, Will Rogers, and many more, sought refuge and relaxation from the bright lights and fame in local resorts such as La Casa Del Zorro and The Palms. Lon Chaney opened up a community theater in Borrego Springs where many actors spent time beefing up their skills, improving and experimenting in their craft.

Ruth says: Walking the one main street of Borrego Springs, we are confronted with time travel: hotel and restaurant signs that hover above still-open businesses, but look like images from a ghost town. 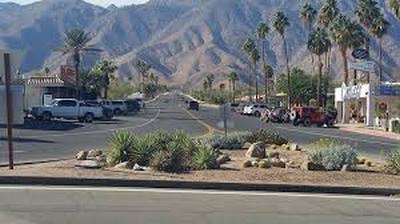 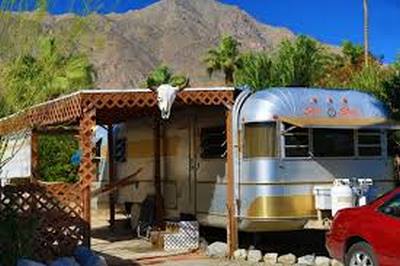 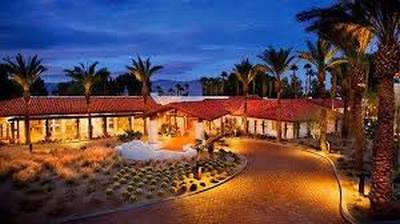 The Palms Hotel stands shrouded by palm trees hanging on to life by a thread. Ruth and I could see it off in the distance from our Airstream campsite and it beckoned to us with voices from the past. We drove off the asphalt road onto sand into a circular driveway in front of a once-grand portico. I was inspired to sing a few lines from the Eagles song Hotel California, “…you can check out anytime you like, but you can never leave…”

It was eerie…the hotel was open, but no one but a few desultory tile workers populated the entire edifice. To one side lay a huge Olympic swimming pool, water crystal clear but cold: better experienced during the sweltering days of summer.

I wandered over toward where the diving board once stood and noticed an inscription carved into the cement where countless feet sprang into the deep refreshing water: the names of the hotel owners, dating from the 1930s. A maw of darkness caught my eye to the right of the missing board and I discovered steps leading down into a catacomb of musty darkness. Stepping past the Do Not Enter sign, my eyes became accustomed to the darkness and there appeared before me two large plate glass windows with a voyeuristic underwater perspective of the deep end of the pool. 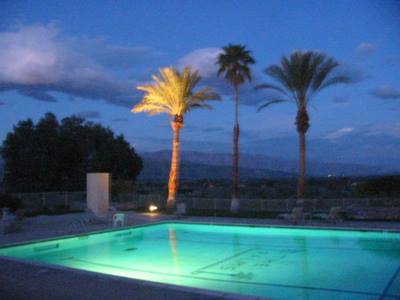 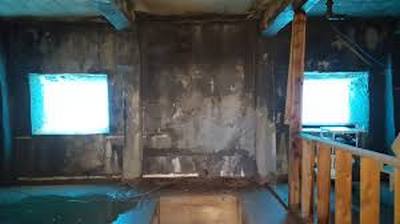 I could imagine the Rat Pack swilling martinis and snarkily commenting on the forms of shapely starlets streaming through the water trailing shimmering bubbles of beauty. Now the room was bare. Paint peeled off the walls. Rusted pipes broke through the cracked cement floor. An aura of claustrophobia came over me and I sought relief up the broken stairs into the sunlight and room windows clearly reflecting swaying palm trees and distant mountains, yet hiding unseen interiors.

Ruth and I took separate pathways of exploration around the vacant hotel interior. Everything was in place, check-in desk with two packages of robes and keys waiting (I presumed) for incoming guests, pictures on the walls depicting people and views frozen in luxurious time, a hotel once grand and desirable, now a candidate for a team of ghost hunters to suss out the calls and laughter from long dead denizens of the silver screen.

Ruth says: While Ben explored the lobby, I wandered into the bar, restaurant, and kitchen. Again, no sign of habitation, though everything was laid out, spotless, like a movie set about to come to life. Upstairs, past standing puddles of water on the concrete, was a row of hotel suites: floor-to-ceiling windows revealed luxurious interiors while reflecting the stark desert mountains. Not a sign of a single human, though the beds were made, the towels laid out, the pillows carefully plumped. Back in the lobby, a small typed notice read: Spa is heated from 5pm to 8pm only. So there ARE people here: but where? 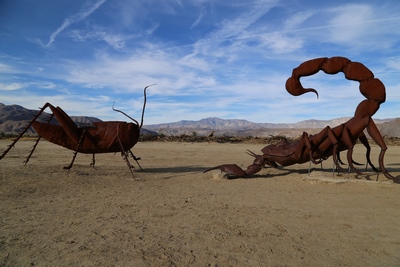 If you don’t do a bit of exploratory homework while visiting Anza Borrego you might miss entirely the amazing metal sculptures scattered over many acres of Anza Borrego State park. Artist/welder Ricardo Breceda spent years creating metal sculptures from our ancient past and modern imagination. Click this link to connect to images and a video tour.

The desert draws to itself escape from the man-made construct of inner city life, and for those of means, luxury, and creature comforts that fame and money provide. The muse of the arts and the bohemian lifestyle of living and acting, free of regard for conventional rules and practices often draws those seeking self-awareness. Those who hear her clarion call seek to embrace the source of life, simplicity, inspiration, and reconnection with the essence and earthly beauty which the desert embodies.

One early 20th century poet, author, and artist, Marshal South, pursued the natural lifestyle with his family from 1930 to 1947 in remarkable simplicity and perseverance in the Anza-Borrego Desert.

He and his wife experimented in extreme living, building an adobe house and compound on the top of a waterless desolate “Ghost Mountain,” where everything necessary to exist had to be built or carried in with extreme effort. During these years, Marshal and his wife raised three children, and home-schooled them, while they authored 102 articles and poems for Desert Magazine. Marshal built a printing press and the children learned linoleum carving and printing. Their creation caused a stir at the time and fueled Marshal’s doctrines of living, to his and their detriment: he became so locked into his vision and righteousness of lifestyle that he couldn’t bend with necessity and change. His relationship with his wife soured and the “experiment” on the mountain failed.

Getting back to the land, and reconnecting to the heart flame of humanity, sung by Joni Mitchell in the 1960s hippie theme of returning to the land, “We are stardust, we are golden, and we’ve got to get ourselves back to the garden…” caught the recycled wave of Marshal’s naïve attempt at Utopia. So many hear the call of the Muse, and so few find the balance and wise intelligence necessary to exist in our complicated world, to live in the balance between utopian dreams and the reality of the daily struggle for existence.