You and fellow members of your tribe are foraging and hunting across cool, moist, partly-grass, partly-forested terrain. Your clan has successfully completed that rarest-of-rare hunts: a 12-foot tall, hairy, curved-tusked creature that will provide food for all your families and those throughout the region for weeks. Your salt supply in the near hills guarantees your provisions’ sustainability.

As you set about the long task of cutting meat and stripping hide for clothing, a bright light appears in the sky to rival the sun warming your back as you toil. Within the blink of an eye, an even brighter flash and streak across the sky is followed by sound louder than any thunder you have ever heard. You are pushed back onto the ground, now shaking under you, and fear precedes a powerful heated wind muffling the cries of your fellow hunters. A huge cloud of smoke rises before you, spreading out and up into the sky obscuring the sun and turning day into night. Rocks fall around you and burn your skin. You pull your animal hide covering around your head and join your comrades running to escape the nightmare dreams come to life before you. An overhang in the rocks provides temporary shelter as a premature cold darkness falls upon you all…

Driving along the two-lane blacktop, we leave the interstate and proceed six miles south along barren, scrub-lined, mostly flat terrain and up a rise like the outside of an anthill, to claim parking outside the Meteor Crater visitors center. Paying our admission, we trek up a number of flights of stairs and soon the prospect of an unearthly crater comes into view before us.

It’s as if we’ve been transported to the moon. Statistics for this giant hole in the earth state that it is was created 50,000 years ago. Blasted out by a meteor approximately 160 feet across, and weighing 300,000 tons, it mostly vaporized during impact with a force of 10 megatons. A giant crater was created, three-fourths of a mile across and almost two-and-a-half miles in circumference. The most powerful nuclear weapon ever exploded was 50 megatons and Russian in origin. The bomb that exploded over Hiroshima was 15 kilotons, considerably smaller in force.

Entering the atmosphere, the meteor was traveling eight miles per second, or almost 29,000 miles per hour. At almost 38 times the speed of sound, this blast through the atmosphere would have created a monstrous sonic boom! In the visitors center rests a residual artifact of the meteorite—constructed of mostly iron and many trace minerals and weighing 1,409 pounds—that was discovered several miles away. Standing on the rim of the crater, I felt the sense of falling into its maw, which rose 560 feet from base to rim, approximately equivalent to a 52-story building. If you are not full of statistics by now, let me point out that it has been calculated that the crater bowl can hold 20 football fields and the equivalent of two million spectators seated around its sides.

Let us return back to our fictitious presumed Paleolithic traumatized tribe. If the timeline of the meteor strike was skewed forward in time from 50,000 years to between 13,000–16,000 years, the coexistence of tribe and event would have been likely. As of 2017, there is a hotly contested revision of human history on the North American continent, claiming some form of pre-modern human, perhaps Neanderthals, extending back 130,000 years.

This is based on crushed Mastodon bones found in San Diego, with nearby stones resembling smashing implements. Currently it is understood that humans did not range out of Africa until about 50,000–80,000 years ago. There is a good probability that Mastodons did coexist with our ancient North American native population at the close of their extinction between 10,000–11,000 years ago. It is conjectured that human predation was the cause or at least the hastening of their extinction. The last known evidence of Mastodon habitation was on Wrangel Island off the coast of Alaska between the years 2,500 and 2,000 BCE, approximately simultaneous to the construction of the Great Pyramid of Giza.

Whether it was human, mastodon, or both that witnessed this cataclysmic event, the effects have sounded and resounded on through time. 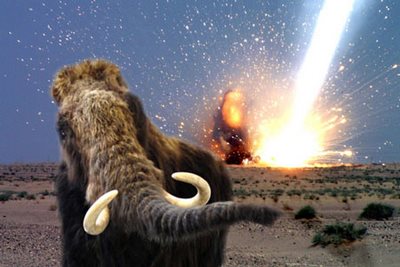