In recent past blog posts I mentioned that a few places would be revisited for special mention. One of these is the Arizona-Sonora Desert Museum, which I had briefly described as one of my “favorites.” It sits just on the edge of Saguaro National Park and at first glimpse we both anticipated a fairly mundane desert history, flora, and fauna description. Boy were we wrong! As a kid, when visiting museums, it was pretty much de rigueur to walk past dioramas of ancient scenes of taxidermied animals, dinosaurs being attacked by cavemen…(some people actually believe this one), woolly mammoths, and the like; very often placed behind thick plate glass to prevent the viewers from tossing in their cast-off cigarettes. The Desert Museum, though, is a living exhibition in which you are part of the changing diorama. 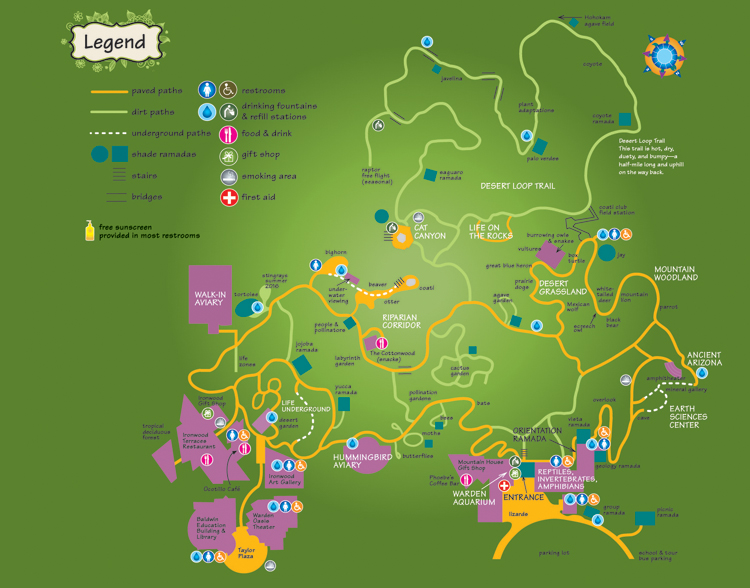 Walking along a smooth stone pathway, we came to the Earth Sciences Center, passing into a cave so real, through a portal invisibly blended with the natural rock wall face, we had to carefully inspect the material to convince us it was artificial. There were narrow cave passageways to be explored, confining enough to awaken claustrophobic fears, broken by openings with geologic history and rock formations explained, all in an Arizona context. We passed occasional tables set up for docent specialists to answer any questions and expound on special topics. Water flowed and could be heard trickling around, over, and under rock formations lit by the same colored lights that are found on any cave tour.

After passing through the cave environment, a deep explanation of the development of Arizona in the context of the earth’s evolution in its epochs was succinctly and clearly explained. At this point we felt prepared to be connected to the climactic and geographic regions we were about to pass through and the flora and fauna associated with them.

When we passed through the entrance we received a guide map and legend of the nature park, and at first glance it seemed as though part of this place was a zoo, but this was not the case. This living museum takes regions and blends animals and everything around them into context. After we passed the mountain lion and bear habitats, I couldn’t help but glance at our guide’s safety warning that sightings and encounters with wild animals could occur and that should we see a wild animal loose on the grounds we should not approach it—we were to notify museum staff at our earliest opportunity… You betcha! 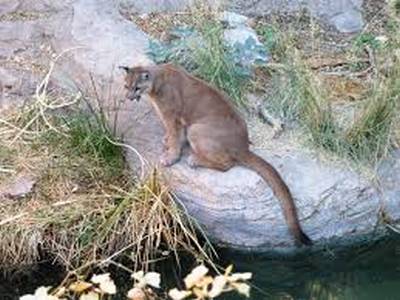 In a number of habitats animals could be viewed both above and below ground and water. A beaver, for example, could be observed swimming through rocky pools disappearing into its den, but—never fear—a quick skip down a tunnel would bring you to a viewing station and a convenient push button to turn on a light in its windowed hideout. I took advantage of this, and after surreptitiously glancing around to see if anyone was looking, flashed the light on and off to try to irritate it enough to make it look through the glass and bare its massive teeth. It was useless. Countless kids before me had already conditioned my eager industrious buddy to pay no heed.

A mile long dirt pathway was constructed either to simulate a desert loop trail or a hike though a desert canyon with coyotes roaming about, separated from the viewer by only an extremely fine, almost invisible mesh fence. Countless cactus and desert plants were carefully placed and marked to educate and stimulate the senses.

Crossing a series of bridges over flood washes, signs alerted us that packs of Javelinas took refuge in the cool darkness below. At that moment, a park docent drove by in a golf cart loaded with lettuce and proceeded to pitch it to a rapidly emerging assembly of snorting, tusked peccaries (as they are properly called). They had practiced this drill before and they trotted in-line to the easy hand-outs. We smiled, remembering just a few days before walking through the town of Ajo through packs of these buggers looking much less friendly than in the safety of our current setting. 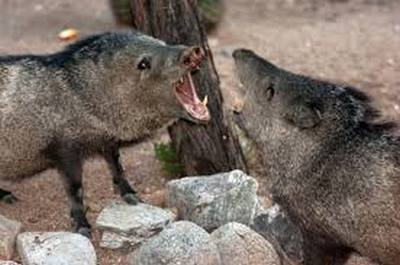 When we entered the park, the ticket attendant asked me if I was interested in purchasing additional tickets to enable us to have a stingray encounter. I accepted, though years earlier, as a diver, I had the opportunity to observe them in their own environment. By now you are beginning to get the impression that I was one of those troublesome mess-with-the-animals-and-environment kind of kids that caught the eyes of park and zoo caretakers? I suppose so, but that trickster curiosity put me in good stead later in life when learning actually did take place.

Getting back to our story, though: In a pavilion with a large concrete pool, there swam about seven or eight stingrays, circling the perimeter. After paying a couple of bucks for “stingray food” (comprised of squid and shrimp that I threatened to eat myself), we were shown how to hold the food in our hands so that the rays who had no teeth could settle over the food and suck it in.

Their skin was soft and slick like someone had spread liquid laundry detergent over it. They seemed to enjoy our touch, though perhaps it was just the anticipation of food, and they passed over and around our hands like silent ghosts in the water. It was quite calming yet eerie watching and feeling these underwater “birds” slowly and silently flapping their wings past us.

We passed into a very large cactus garden and, though I can see you yawn in familiarity, I suspect you have never seen so many different varieties of cactus in one place. We sure hadn’t. There were creeping, “jumping,” variegated, twisted, flowered, scented, vined, fat, and tall—you-name-it—examples of desert cactus evolution over the thousands of years. 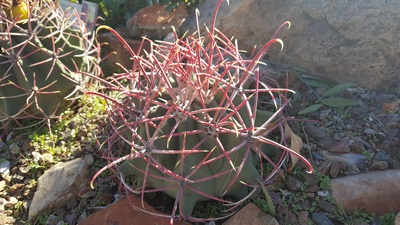 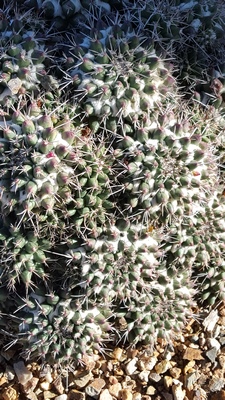 Seriously impressed and jacked up, we walked almost immediately through a carefully laid out rock labyrinth wherein we contemplatively found peace surrounded by buzzing bees and afternoon songbird calls.

Then there was the hummingbird aviary, which required us to pass through a set of doors and a hanging layer of chain to prevent the buzzing beauties from escaping out of confinement into their real environment. It was amusing to watch clutches of people frozen in place like statues while around them the multicolored hummers darted at hyper-speed. Occasionally a bird took interest in someone’s red clothing and everyone shuffled over to ooh! and aww!, again freezing into place hoping for a replay. But the birds had the upper hand, and it seemed like they were choreographing the humans’ movement.

All good museums’ pathways end with the gift shop and restaurant, and by this time, in the heat of the end of the day, my thoughts turned to the soft-serve ice cream that museum staff skillfully publicized to entice the weary and provide ammunition to whiney kids’ parents. But, it was not to be. Our fascination and interest used up every available minute and we were faced with the closing announcement. Our vehicle was one of the last to leave the parking lot and as we drove out satiated, we both exclaimed that it was admission well spent.