What better opportunity to free ourselves from the unrelenting crush of summer excursionists flowing in and around us, like red corpuscles along arterial trackways, than to disengage into a ten-foot-wide opening in the highway fence. The promise of solitude and freedom from DDD: “Determined Driving to Destination” called to us, and we slowed to a crawl on deeply rutted dirt, highway receding into the distance in circles of dust shielding, in brown haze, our arrival. Unhitching our trailer, we set off in search of our oasis for the week. A circuitous mile trampolined past, to reveal a fork in the road and a captivating clearing with views of snow-capped mountains rimming the 360-degree horizon. 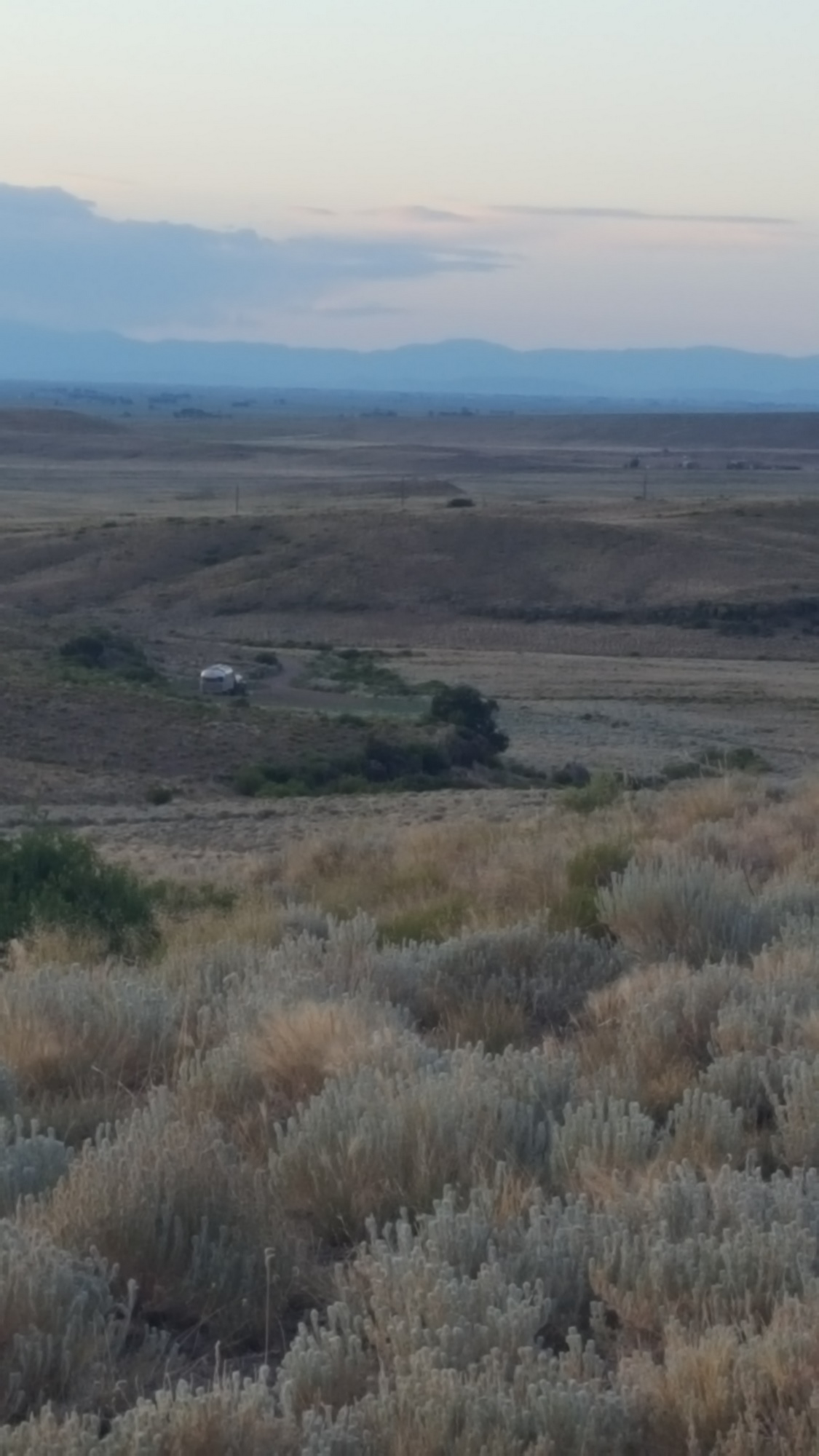 But for the wind, the thrum of blood coursing in our ears was the prevalent sound. We were standing on the edge of BLM-controlled land, on the Old Spanish Trail. This terrestrial artery was trod by wildlife, Native Americans who hunted them, and—between the years 1829 and 1848—became known as the shortest path to riches for traveling Mexican caravans between Los Angeles and Santa Fe. (The roots of this “camino” possibly reach back to North American pre-history and the aboriginal Pueblo people of Chaco Canyon, AD 900-1150.) These highly sophisticated Puebloan natives developed trade routes and commerce spanning great distances. Their prolific social transactions acquired tortoise and abalone shells from the Gulf of Mexico and Pacific Coast; turquoise, copper bells, parrot and macaw feathers from the jungles of Mexico, Central, and South America; and perhaps knowledge of the great Mayan and Incan cultures that flourished before them. Here, in our temporary homestead, we would listen for the long dead ghosts of their hopes and aspirations. The loose network of thoroughfares meandered across the western frontier of the United States, crossing the Mojave Desert, and became the established trade corridor that soon attracted frontier and mountain men, and military expeditions, seeking safe passage across the daunting peaks of the West. The 2,700 miles of trail became known as the longest, most arduous, and crookedest pack mule route in America. There are many stories and legends told of the intrepid Kit Carson, who traversed this route numerous times in his lifetime, exploring, leading immigrants, and in service to the U.S. Cavalry in the Mexican American War.

Santa Fe, a Spanish outpost, was established in the early 1600s, ten years before the arrival of the Plymouth Colony on the Mayflower. The Spanish Trail became a network of connection and commerce between the colonies on the California coast, Presidio Monterey and San Gabriel Mission, Los Angeles, and those in the interior of New Mexico. This trail, though it became more prominent in the eighteenth and nineteenth centuries, has roots deep and wide throughout First Nations’ history. Long before the arrival of Western culture, these paths supported the sustenance and evolution of tribal living. In writing this my thoughts diverge…

…I grew up being taught and believing that Cristoforo Colombo discovered America. Imagine my letdown when I learned that the dude never made it, instead landing on an island in the Bahamas! He was preceded to North America by many others. There are historical claims and perhaps evidence that the Chinese arrived on the West Coast a thousand years before Chris, opening a string of Golden Palace, Panda Express, and China Café restaurants, but the locals never caught on to those hard noodles in the chop suey…

…The driven and dangerous Danes hit the East Coast around the year 1,000, but never hit it off with the natives, who didn’t like being put through mazes of aisles just to get to the cooking utensils. And who needed complicated furniture construction instructions anyhow? The indigenous population were back-to-the-landers, keeping it simple, breaking free from urban and suburban trendy lifestyles. The Vikings eventually returned whence they came, as it appears they encountered a deeply unsatisfied population that would gather in large groups and shout in unison, in their native tongue, “Eye Kee Yaa! Eye Kee Yaa!” Centuries later, it was eventually recognized that the translation from their almost dead language was “Pale-faced, long-haired invaders, Go Home!” But not before the newly civilized Norse of the North returned to honor their memory with the mistranslated named store, IKEA, “Good Home…”

…For years at the summer solstice, crowds of people flocked to Chaco Canyon to await, in awe, the arrival of a vertical shaft of light, The Sun Dagger, that arose over the buttes and pierced a spiral petroglyph chipped into the rock by ancient locals exactly at its center. 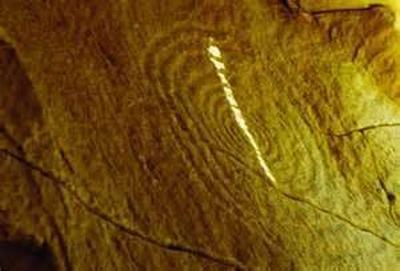 It is no longer visible however, due to shifting rock slabs and increased erosion from extreme visitation. There are other similar manifestations in Chaco, of solstice light penetration into specific sacred Kiva windows. It truly is a wonder how a supposed savage people could command such knowledge. A commonly held belief though, thanks to an undereducated motel manager’s fantastic musings, is that this depth of technology could only have come from alien inspiration. When in doubt, blame it on aliens, credit where credit is due. But I’ve digressed…

Exploration of our temporary homestead revealed scattered bones of horses, sheep, cows, and detritus of grazing, symbolic of the passage of commerce along this route. Our own four-wheel exploration led us deeper into a rocky National Forest area that beckoned us to travel its sinuous trackways, but we held fast before entering a road of no return. There were to be other adventures awaiting us yet ahead.

Just a mere quarter mile away from our alien silver ship, rose a solitary mountain that I named, “Le Petite Teton,” for reasons clarified by observing this image. 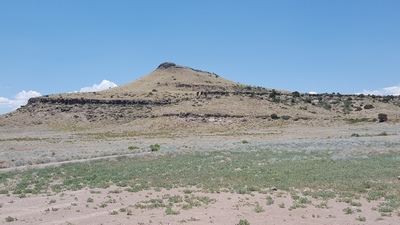 This mount called to us like all objects just beyond our reach, and we could spy a rocky hint of a pathway up its talus slope. Fortified with water-filled backpacks, we set out against a relentless climb at an angle increasing exponentially to close to 60 degrees near the summit. Our home campsite sat at a 7,971-foot elevation and we discovered that our “teton” peak destination was at 8,447 feet. I’ll do the math for you: This is an average rise of about a third of a foot for every foot traveled up the slope. Upon reaching the summit, I noticed a glint of copper reflected off a flat rock face.

It revealed itself to be an NGS (National Geodetic Survey) marker drilled and set in concrete in 1935. Intrepid hikers will discover these markers in diverse locations throughout America, emanating by direction of Thomas Jefferson in 1807, to carefully define the geography of our lands. These markers, once calculated and laid laboriously by hard labor, have since migrated to satellite and GPS reckoning systems.

Every NGS marker has a name or number which can be looked up online. Ours was named Limekiln from a local tributary, and upon research was numbered HL0468, with the geographic coordinates of 37.618466, -106.280297. So now you can plug these numbers into your GoogleMaps and locate exactly the place we stood…except the NGS notes from later surveys (there have been three since) stated that the marker had moved 3 centimeters, perhaps due to shifting rock. I’m not going to think about how much a 3cm movement would look like over 50 million years…Find and claim our camping spot if you are ever in the area (coordinates above). Check it out in satellite view. So few people will take the initiative do this, that the first achiever will win a prize.

Just for the sake of breathing perspective, our 7,971-foot-high campsite is exactly the elevation of Machu Picchu, Peru—you know, the famous hike where non-native visitors chew coca leaves to survive elevation sickness. This is not quite accurate though, as in order to fly in for this excursion you come into Cusco, the highest population city in the world, at 11,152 feet, where said leaves are so much in demand to mitigate elevation sickness. Those wacky Spaniards that marched across America in search of, yet never finding, the famed Golden City, perhaps even along segments of our Old Spanish Trail, were foiled again upon climbing up these perilous peaks.