We attempted to pass through Los Angeles untouched, hell bent for leather, but her inter-city highway madness entangled us in her web. The southern California DMV driving test varies somewhat from that in the northern regions. Turn signals are optional. Driving at the highest possible speed, and cutting in and out of lanes, is perfectly acceptable; and in the HOV lane there is no speed limit unless caught, which is rare and worth the thrill.

Pulling a 50-foot rig through this video game of white knuckle terror was unbelievably tense and I found myself chanting a Buddhist mantra, “Ooooohmm…crazybastards…oooohmmm!” There was light at the end of the tunnel, however, in the oasis by the ocean, Emma Wood State Beach. 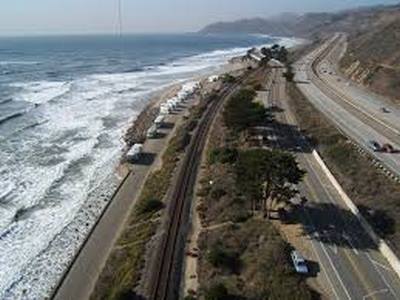 This magic place can barely be seen as you accelerate south and inland through Ventura on your way to meet up with your fellow demented drivers, ocean on your right. Slinking along the highway wall and immediately adjacent to the Southern Pacific railroad tracks for approximately one mile, there are close to 100 RV berths directly in the spray and salty air of the ocean, waves crashing and melting away any thoughts of the stresses of the streets. This was our haven for four wonderful days. The only thing I missed was the opportunity to climb into one of several small drainage underpasses as the commuter trains sped three feet overhead at 50 mph.

Several nights we explored the heart of Ventura, and I must admit that my beer growler could not remain empty. The center of town has gone through a significant renovation, with craft breweries, surf culture establishments, pubs, cool themed restaurants, and hipster arts and crafts for those seeking unusual finds to decorate body and abode.

On up the road, in San Luis Obispo, we found a new home in El Chorro county park (translated as, “The Jet”—don’t ask me, I don’t have a clue). The wonderful campground was run by the ground squirrels, who maintain an extensive underground tunnel network throughout the area. I spent about half an hour trying to capture a photo of the little suckers, but they are very sensitive to showing their faces anywhere close to 50 feet away. 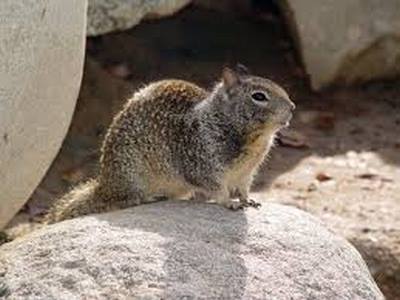 Don’t make it a habit to walk across their infield at night, by the way, if you don’t want to make an emergency visit to the ER for twisted ankle x-rays. Watching these guys, I swear, I could hear the echoes of past Bugs Bunny cartoons in my head…or was that Road Runner? This park did appear to be laid out by squirrels though, with an inside camping ring having opposite side hook-ups from the outside ring. Our sewer hook-up barely made the stretch from one side of the trailer to the other in-ground connection. I had momentary thoughts of what it might look like, if for some reason, that hose came loose during a pump out…dump and run!

El Chorro has much to recommend it in amenities. Second-to-none dog parks (yes, plural!) bigger than a Petco store, with barbeques, buckets of tennis balls, and more than a dog or owner could ever ask, except perhaps on-site grooming. The hiking trails are astounding, and we huffed up several miles to a giant boulder called Eagle Rock. Gyp gladly sought the downhill portion and a cool water dip in the dog park pool. Yes, that’s what I said! It’s more than we got, doggonit!

In town, San Luis has all the amenities of a college town: restaurants every ten feet, bars, pubs, vegan and gluten-free pizzerias, shopping, a real happening! Imagine an old school Mexican square from the 18th and 19th century (that it really isn’t), and people walking around seeing and being seen, called El Paseo (which it really isn’t), and you have the downtown—which it isn’t, really. A trip to San Luis will be a delight. Don’t miss it before you’re missed in the 21st century…and did I mention the Creeky [sic] Tiki??

As we travelled highway 101 north from San Luis Obispo to King City, the vista was one of thousands of acres and miles of lookalike, same-root-stock-and-height, grape vines. Think Sutter Home. This is the terroir of the entry wine of the masses which broke up the monotony of our twists, turns, and roller coaster hill driving. 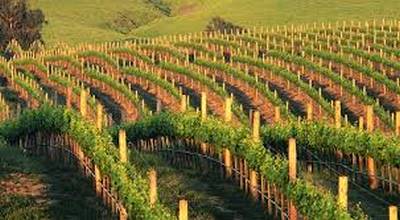 We passed the Mordor region of oil pumpjacks pulling up, from the deep, the history of the earth in oil, created millions of years ago when this area was a vast inland sea and a lush verdant marsh. Tectonic uplift created a swampy, snuggly, warm nest for the development of mammoths, hippos, and saber toothed cats into a habitat known in modern times as “hip-cat” LA.