We hadn’t done it in over 30 years, neither of us, so we rolled into Disney’s Fort Wilderness Resort and Campground for a week’s adventure…now, “rolling in” is an understatement as the Disney Dream Machine bought land for cents on the dollar long ago in the “Way Back Machine.” Driving into Disney World is like visiting Yellowstone NP—if you think you are going anywhere fast in time and distance, forget about it. Both places sport “great huge tracts of land.”

Fort Wilderness opened in 1971, the same year the Park opened, and in true Disney fashion has 799 campsites, and 409 air-conditioned wilderness cabins on 700 acres of forest and lakes (the italics are mine). This piece of paradise sits among four theme parks: Epcot, Magic Kingdom Park, Disney’s Animal Kingdom Park, and Disney’s Hollywood Studios. Oh, and there are two more water parks, sorry: Disney’s Blizzard Beach and Disney’s Typhoon Lagoon. I’m not even going to get into the numerous resort hotels that service this giant monolith, nor the massive vehicle infrastructure: buses, cars, trucks, boats, monorails, trains, horses, carriages, golf carts, bicycles…I know I’m leaving something out here! Well, maybe I will get into it, we’ll see…

We pulled up to the greeting kiosk and were given the tummy tickling Disney welcome and visitor package which included the most-important Magic Bands in the colors of our choice, unless we’d decide to purchase a customized one from the Disney stores located everywhere throughout the Park and, of course, online. 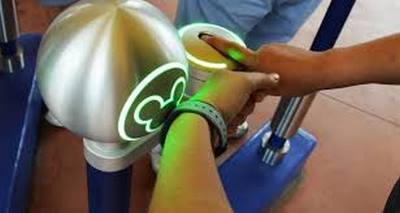 This state-of-the-art band has the look of an exercise tracker, and uses an R-Fid chip to electromagnetically track your every desire, allowing you to program it to fast track you through the often one-hour waits on the attractions, and to lighten your pocket of any necessary cash and credit cards. Wearing this band simulates the illusion of life in the 24th-and-a-half century, when we no longer have to use money, just wave your hand over a pick-up and your wish and your command come true. It’s almost that easy. A wave, and sometimes a little pin code if you’re purchasing big ticket items like lunch or dinner. You can’t let your euphoria dull your senses though, as these purchases on the Disney properties are, for the most part, expected pricing times two.

The Magic Band admits you to the Park after a very careful passage through metal detectors and airport quality TSA inspection of all carry-ons. I didn’t forget to leave my switchblade concealed weapon behind, which in Florida requires a special permit, allowing a concealed carry gun as well, but that’s not allowed in the Park, and is another whole story. When you first enter the Magic Kingdom, you wave your armband over a four-inch metal representation of Mickey Mouse, wait for the magic circle to change color from warning red to freeing green, place the finger of your choice over the fingerprint reader until it is recorded, and from then on your presence and safety within the Park is preserved for posterity. Privacy is another issue entirely.

Pausing for a moment to contemplate the degree of infrastructure needed to operate this massive monster of the Park of Muses is like peeling away layers of an onion that grow as you strip them down. Looking at the property as a whole, it spans 40 square miles, the size of San Francisco! Maintaining the grounds, roads, and what lies below them to look like a happy, clean, safe, welcoming Small World, gingerbread, cartoonesque dreamland is a massive undertaking on a city scale. Moving people and vehicles efficiently, handling food, utilities, waste; supply and use of energy; housing guests in all the venues; security/safety, inter-intra communications; public relations and entertainment; maintenance of all rides that run a minimum of 12 hours a day and carry huge numbers of people, requires an amazing network of interconnectiveness.

Let’s look, for example, at the Pirates of the Caribbean. 50 boats carrying approximately 1,150 people at a time, travel over 630,000 gallons of water during the eight-and-a-half-minute ride, and encounter 119 complex audio-animatronic characters. The music, explosions, effects, and timing boggle the mind. The rollercoaster ride, Space Mountain, has 13 two-car trains that can carry a total of 78 passengers, running continually at speeds up to 28 miles per hour, which seems faster in the dark. Speaking of Space Mountain, your mind plays time and space tricks with you, on a 26-foot drop of only two and a half jerky, speed- and direction-changing minutes.

Two men seeking punishment in the Kingdom attempted to tackle all 46 rides in Disney World’s four theme parks in a 17-hour day in 2015, and succeeded. Engineering of all genres is king in the Kingdom!

We purchased a three-day pass into the Magic Kingdom for a king’s ransom, and were allowed fast pass privileges with our Magic Bands for three rides per day, the rest on a queue basis. I was curious about the ticket price to enter the Park when it opened in 1971, and learned that it was $3.50 for admission plus ride ticket books ranging from $4.50 to $5.75, allowing entry into the rated rides as many of you may remember, from A-E. You may also remember the E-ticket, and how it has entered our lexicon as getting on the best ride experience. Our cost ran approximately $1,200, including lodging and one three-day Park entry and ride privileges.

Most RVers rented golf carts to move around the Fort Wilderness property’s tennis courts, theme-related trinket shops, groceries, and roadways, and just tool around like 12-year-old kids on their first driving experience. (Disney World provides this attraction in a much desirable safer mode, where you can pilot your own mini car along a roadway bouncing from one side of a safety control rail to the other, preventing the inevitable side impact crash that would come from 98% of the drivers.) At times I felt like I was back in Thailand on the streets of Bangkok, where traffic rules were implied, enforced by bribes, and a small motorcycle or bicycle would carry mother, father, children, animals, sacks of groceries, and appliances, weaving in and out of crazed, chaotic traffic.

We avoided this melee, and each morning rode our bikes to the dock of Bay Lake on the edge of Fort Wilderness to board the boat carrying us to the entrance of the Magic Kingdom. After passing through the checkpoints we joined thousands of people debarking from the above-mentioned vehicles who thronged to the entrances of the six lands within the kingdom: Adventureland, Fantasyland, Frontierland, Tomorrowland, Liberty Square, and Main Street USA. Everyone crowded up Main Street, and the swarming multitudes were held back from entering their chosen Land until the cannon fired precisely at 9:00 am.

Everyone had a planned go-to before-crowd ride. Most attempted to avoid the mind-numbingly scientific crowd control queues that wended in a slow moving crawl around tight turns like intestinal folds that if stretched out, would at guess, be a mile in length. 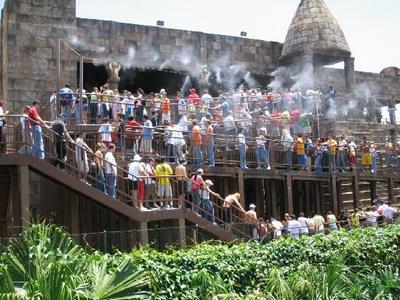 Fans and misters were mounted above in strategic locations to ameliorate heat stroke in the melting sun, and goofy (pun intended) diversions placed along the pathways kept parents from murdering their impatient kids during the long wait. A curiously minded person has much time to contemplate whatever thoughts he or she may wish to entertain. I often picked out a person, often a scantily clad nymph, to track. As we wended our way in and out of the infinite ribbon of passage, I couldn’t help from pushing back the realization that “could one hour of waiting be worth a three-minute joy ride on a fast moving roller coaster?” Well…looking at the previously mentioned eye candy and asking that question brought up the inevitable answer, my friends. 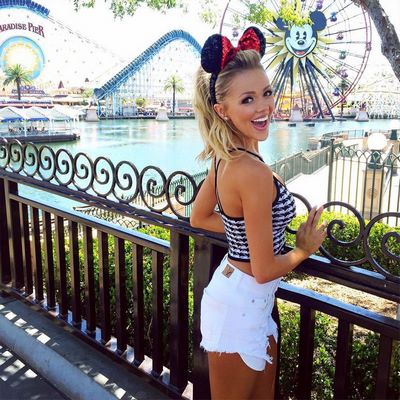 One memory I do have from my last visit to the Park years ago was how hot it can get in central Florida. Not just hot but humid, with both in the mid-nineties. Ruth and I found a secret shelter and respite from both in a sheltered ice cream parlor in Adventureland that had a protective wooden wall along its front and a dark narrow corridor with just enough room to pass through from ordering to pickup. There were three windows along this dark passageway: one to order, one to pick up, and a third that was shuttered, with slats spaced to allow a massive air-conditioned blast to pass through, and a small nook for us to stand in and stare out through the blinding heat toward the teaming hordes moving by in a curtain of heat. Needless to say, this became our oasis of refuge over the days of our visit. The ice cream purchasers passed us, satisfied with its cooling qualities and wondered what two lone people were doing standing in that dark hallway. Some recognized immediately our status and remarked admiringly. We used the Jedi mind trick on them to save our secret igloo.

There’s lots of time to think, but so little opportunity to hear your thoughts! From the time you enter the Magic Kingdom, there is sound—often subliminal at times—mostly very present and in your face and body really: music. 1950-60s cute, Disney, mind-numbing music, and cartoon voices coming from everywhere. It doesn’t leave you alone, the music and sound grabs your consciousness like a mongoose sinking its fangs into a cobra. You can’t escape it. It’s on the walkways everywhere, in the bathrooms, in the queues, on the rides, in the restaurants, everywhere it explodes in your head telling you that you are being entertained and happy.

Entrance audio loop for you to play during a pleasant deck party! (Warning: it’s an hour long…)

At the end of the day in the Park, we begged for mercy from the onslaught, barrage, and salvos of sound. It was in many ways more exhausting than the combined crowds and heat that magnified as the days grew long. The grand finale, of course, was the end of the evening pre-Park closing fireworks display where all the elements crescendoed to complete the migraine-inducing explosion of noise and send you away, a stumbling, satiated zombie. Mind you, we love fireworks more than just about anyone, but we savored being safely and silently on the boat back to our bikes, our quiet campsite, and the Silver Submarine. We think we have finally satisfied a desire to return to our lingering memories of the entertainment of the Magic Kingdom.