We slowly meandered east and up along the south Texas coast line hugging the Gulf of Mexico’s warm waters, and serendipitously chose Galveston Island as our place of refuge and discovery for a time. We discovered a pleasant campground, Galveston Island State Beach, and were placed on the bay side, away from the roar of the waves and the salt surf, in a peaceful circle of 20 peripatetic RVs, phasing in and out, like birds in a nest.

Our usual practice is to study the web for local spots of interest to explore, and Ruth mentioned the Bryan Museum. I perked up immediately when she described it as one of the foremost museums of western history and artifacts. I’ve had a long fascination for the subject, and, well, we have been traveling through most of the heart of the West these past months, so for crying out loud this opportunity fits right in like a well-used pistol in its carefully oiled holster. 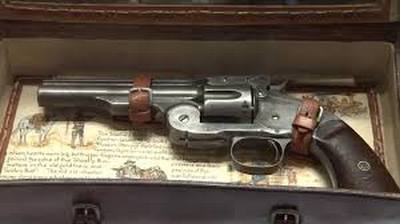 The Bryan Collection, assembled by JP and Mary Jon Bryan, houses one of the largest collections of historical artifacts, documents, and artwork relating to Texas and the American West, spanning more than 12,000 years. JP is the descendant of Emily Austin Bryan Perry, who was Stephen Austin’s sister. Stephen Austin was the man who founded Texas by leading 300 families from the US into the region in 1825. The Bryan collection has its roots deep within the family, as both Bryan’s father and uncle were collectors; not merely to spotlight the illustrious family legacy and pedigree, but also their relationship to western American history.

Let me tell you, the imposing edifice that houses this collection is metaphorically like the inside of the mysterious warehouse that held the Ark of the Covenant at the end of the film, Raiders of the Lost Ark, except that this building is nothing like a warehouse. Every aspect from the outside to the inside of this structure carries the imprint of quality, care, and attention to detail that represents the family and its legacy.

Walking into the building you are struck by the fastidiousness and craftsmanship in every quadrant. The woodwork, top to bottom, is finely finished and polished and every exhibit presents itself with the utmost in appropriate technology and thoughtfulness to the legacy of the period and its transmission to our 21st century milieu. Many of the exhibits offer, outside their displays, iPads for further detailed research and examination. For example, you can peruse the page-by-page journal of Cabeza de Vaca, an early explorer and adventurer who was shipwrecked in Galveston and traveled for many years throughout the region. (If you want to discover an adventure story unlike any other, read these journals and be transported to a time and introduced to a person of superhuman fortitude and perseverance.) Another iPad allows the viewer to study in fine, magnified detail each of the numerous rare handguns and rifles displayed in the case, each with its significant connection to historical events.

If this hasn’t piqued your interest, you might, after studying a huge diorama of the battle of San Jacinto—depicting the decisive battle of the Texas revolution led by Sam Houston engaging Santa Anna’s Mexican army—examine the iPads and follow the engagement from both the Texans’ and Mexicans’ perspectives. You will spend so much more time in your fascinating inquiry than the fight, which lasted just 18 minutes.

We had the opportunity to self-explore through the museum but our timing was perfect to be led by our docent, Jack Evins. Our group of four was held enthralled for close to two hours by Jack’s erudite and easy manner of making history and the collection come alive. In keeping with the demeanor of quality permeating the Bryan, Jack answered all the questions from our group with care and detail. Early on, after a description of a rare pistol in a display case, I queried Jack about the cartridge caliber. He responded that he was unsure but after the tour he would look into it. Sure enough, immediately following our excursion, he came to me to explain that he had contacted the museum exhibit manager, who showed up shortly thereafter and proceeded to open the display case, remove the pistol with white gloves, examine it, and answer my question. I don’t encourage this, but try that on a docent tour in your run-of-the-mill museum, my friends. This speaks to the museum’s (and Jack’s) level of the love of subject, deep interest, the desire to continue accumulating knowledge, and dedication of service with no recompense expected. All this to say, this is a pretty special understated gem of a place where people of means have taken upon themselves to display their passion for others to enjoy, instead of cloistering their collection hidden behind gated walls.

I have barely scratched the surface here, from the building itself (which has a long and compelling history of its own), to art, to artifacts, clothing, weapons, and historical and rare documents. The permanent collection contains examples of all these and more, from prehistory, through the Spanish colonial era, to Texas frontier and statehood. Also housed within the exhibits are western rarities in general, and paintings both period and modern that can stand “Texas Tall” against any museum in the world. It is not just a place of sights, but also of sounds. After a brief description of an exhibited Spanish mission bell, my childlike curiosity to reach out and tap it with my ring to hear its tone (very strongly discouraged!) was assuaged by the recorded tone as we passed by—a satisfying, sybaritic, and satiating sound, saving me admonishment and embarrassment.

We were honored to be able to engage on this level of enrichment and endowment of family, history, and country. I was exhausted from attempting to retain as much of the richness of detail into memory. From now on, if you say Galveston, I say “The Bryan!”