Webster’s dictionary defines kitsch as: “Something that appeals to popular or lowbrow taste and is often of poor quality.”

Well, YES! But what Webster’s doesn’t tell you is that, when it comes to roadside attractions, this kitsch is, in a word, irresistible. Most roadside attractions date from the 1940s through the 1960s, the Golden Age of the American Road Trip, when gas was cheap, cars were the size of yachts, and seat belts were unheard of. Originating in America and western Canada, these oddities were designed to separate tourists from their cash by roadside entrepreneurs who were often as odd as the attractions they built. I remember as a child in the 60s, going on road trips with the family and seeing the billboards as they passed. If nothing else, they broke up the endless monotony of the miles and miles of driving. 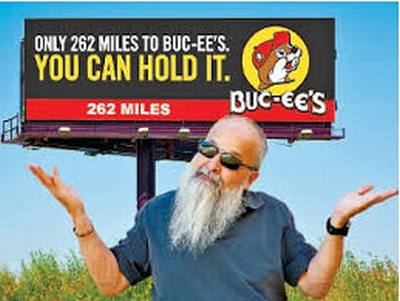 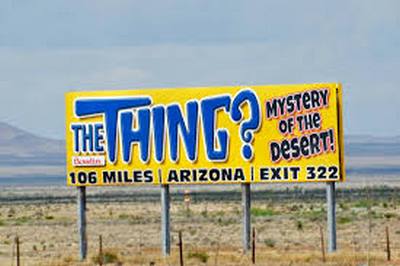 While we’ll never be able to recreate the newness, excitement, and titillation of the 1960s roadside attractions, we have sampled a few in the past few weeks:

First stop: Desert Hot Springs, California, just a few miles north of its better-known neighbor, Palm Springs. We spent a lovely long weekend there with our wonderful friends, Debra & Dan, soaking in the lithium hot springs, having tasty meals and sparkling cocktails, and catching up.

But bright and early Saturday morning, the four of us headed west to Cabazon, home of the iconic pop-culture Cabazon Dinosaurs since 1975. 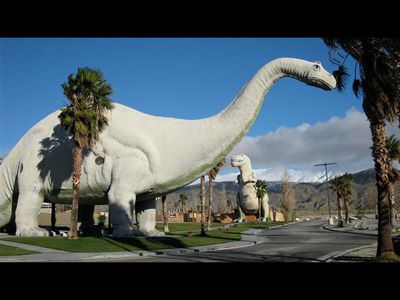 As the website states: “Mr. Rex’s Dinosaur Adventure includes a dinosaur exhibit featuring over 50 lifelike dinosaurs, a dinosaur dig, fossil panning, and access to climb inside Mr. Rex all the way up to his mouth!”

And we did. Here’s the view.

The Cabazon Dinosaurs are everything they should be, and more.

A lush jungle setting in the desert, dinosaurs peeking through the vegetation at every turn in the path. Indoors, sound effects and audio-animatronics recreated scenes from the Jurassic.

Some dinosaurs even had saddles affixed, for convenient dinosaur riding (for those young-earth creationists with no head for actual facts that believe humans and dinosaurs co-existed).

A couple of weeks later, finding ourselves camped outside of Tucson, Arizona, we opted to spend a day at the nearby Old Tucson Movie Studio. This is what Disneyland would be on a budget and with little talent (though there was some, as you’ll read later). Over 400 movies and TV shows have been filmed here, some of which include Gunfight at the OK Corral, Rio Bravo, Have Gun Will Travel, Death Valley Days, Rio Lobo, The Outlaw Josey Wales, Gunsmoke, Bonanza, and The Quick and the Dead. Suffice to say, the place is strangely familiar.

Our first stop was at the Saloon and Palace Theater, whose show featured a sadly talent-deprived troupe of young women, trying oh-so-hard to act, sing, and dance, but crippled with a bad script and the inability to act or dance (though they could sing). The opening solo was, anachronistically, the 1946 “I’ve Got the Sun in the Morning and the Moon at Night,” reminding me of those western movies made in the 1960s, when, instead of 1860s hairstyles and no makeup, all the women had 1960s bouffant ’dos and makeup.

So there this poor woman was, belting out a Cole Porter song to an Elvis generation. Dressed as a madam in an 1880s saloon.

There was a thin plot line about this madam looking for new “girls” for her show. The three obligatory shy, hick, and tomboy personalities came up to “audition.” The show was so incredibly—but oh! I can’t go on.

Happily, the saloon had a full bar, and that just about put us in the right mood. We gratefully exited at the end of that show, and wandered around, struggling to find something that wasn’t too painful to watch. Thankfully, most of the retired, baseball-capped, Old-West-experience seekers waddled from venue to venue, keeping up with the show schedule; this left many of the streets deserted, and it wasn’t hard to turn an empty corner and imagine ourselves in the Old West. We enjoyed striking up conversations with the many costumed actors and workers milling around and manning the mostly-empty exhibits. We saw an okay bank robbery/shootout; the stunts were pretty good, but again, who wrote that script?!?

After a disappointing lunch at Big Jake’s (shamelessly named after the John Wayne film), we found a seat at the top of the bleachers for the Stunt Show. If anything was going to be good, or so downright bad that it would be good, this would be it. And this is where what little talent employed at Old Tucson shone. The three young men put on a show that was actually interesting, and most of the stunts quite good.

They demonstrated classic fist-fighting; stomach-punching and face-kicking; how to look like you’re shooting someone when you’re not (and yes, blanks can hurt or kill you if not done right, just ask Brandon Lee—oh, wait…); how to take a fall (sometimes from quite scary heights); and how NOT to get burned in a burning building. And all this while keeping up a steady stream of goofy slapstick, entertaining dialogue, ballet-like choreography, and (mostly) funny jokes.

A week or so later, we set up camp in Benson, Arizona, about 50 miles from Tucson and just down the highway from the (in)famous The Thing? (more below). But first, more of the Old West. Bright and early Sunday morning, be-hatted and booted, we headed to Tombstone, The Town too Tough to Die. Also known as The Most Famous Western Town in the World and Home of the O.K. Corral.

Roadside billboards show a quartet of black-hatted, droopy-mustached lawmen, pointing their guns straight at you and shouting “Gunfights DAILY! See Wyatt Earp & Doc Holliday!” And who can resist?

We started the morning with a visit to The Tombstone Historama: The True Story of Tombstone, narrated by Actor (need that title!) Vincent Price. A triumph of early 1960s technology, Tombstone’s history “comes alive” in the shape of a lumpy, “laser-controlled” diorama on a revolving stage, decorated with small vignettes from Tombstone’s early history.

The story of Tombstone unfolds through blinking lights, jerky wooden figures, garbled sound effects, and a projection screen that lowers and rises over the diorama to show Western movie clips—although it often rises and lowers in the middle of whatever it is that you’re supposed to be watching—and to allow the diorama to rotate to the next scene. My favorite bit was the vignette showing Morgan Earp being shot while playing pool. The little figure stood for a moment in the spotlight, there was the sound of a gunshot, and poor Morgan abruptly bent at the waist and landed on the pool table with an audible “thunk!” Our laughter mercifully drowned out the soundtrack for a while.

You may well ask, “Why Vincent Price? Why not Walter Brennan, or Jack Elam, or one of the other many supporting actors whose voices we know and love from movie westerns?” Alas, the story is less interesting than we’d hoped:

Vincent Price was a friend of the original owner of The Historama, and did it as a favor.

Guided by signs “To the O.K. Corral!”, we sat through an excruciating reenactment of the famous gunfight: the Earp brothers and Doc Holliday versus the Clantons and McLowerys; and it was then we realized just how much talent the guys at Old Tucson had. Seems that any old biker with long hair and a mustache can be employed in the streets of Tombstone—just give ’em some chaps, a pair of boots, a raggedly hat, and hey, presto! another authentic reenator. It helps if they can drive a team of horses, but even if not, they can stand in t

he street, hawking the various attractions: “O.K. Corral gunfight, starting in 5 minutes!” “Come eat at the original Crystal Palace Saloon!” “Have a drink at Big Nose Kate’s!” and “See the Bird Cage Theatre, one of the West’s Most FAMOUS LANDMARKS and #1 Most Haunted Building in America!”

“Mystery of the Desert.” “Ghost of the Past.” “What is it??” These are just some of the many billboards advertising America’s most purposefully mysterious attraction, The Thing?. What is The Thing? Well, to find out, we entered a gift shop full of an amazing collection of kitsch, where we were greeted cheerfully by a gray-haired, bespectacled old lady who asked, “Can I help you?”

“We’re here to see THE THING!” I announced in the same tones you might say, “The Smithsonian!” or “The Louvre!”. She grinned and welcomed us, took our $1 each, and we stepped through the rear door of the gift shop, following the gold footprints painted on the narrow sidewalk. The exhibit consists of three large sheds housing a collection of—what to call it?—the type of old junk you might find in anyone’s garage or barn. The first shed contains old farm implements, tractors, cars. One sign reads, “1932 Buick. This antique car was really THE THING.” “1937 Rolls Royce,” reads another. “This antique car was believed to have been used by Adolf Hitler…THE THING is, we can’t prove it.”

The strangest exhibit was a metal cage full of life-sized wooden figures (carved by Ralph Gallagher, “Artist”), being tortured by hooded mannequins. “This display is worth many thousands of dollars,” we are told by a sign. And this incomprehensible display (my favorite):

But what you all want to know is: What IS The Thing? Well, if we told you, we might become victims of the Curse, so we’ll just have to keep The Secret of the Desert.