You pull through Twentynine Palms, California, just before your entry into Joshua Tree National Park, where the Mojave and Colorado Deserts join in approximately 800,000 acres of stunning landscape. This region is one of earthly power and tension, as the famous San Andreas Fault separates the Pacific and North American plates on the southern border of the park. The North American plate slides down toward Mexico and the Pacific plate crushes into it moving north, sumo wrestlers creating a compression zone of movement about two inches per year…except for those times when it jumps radically, as is due at any moment!

As you drive up to the park’s northern boundary, you curiously check Google for the origin of its name. Mormon settlers passing through this region in the mid-nineteenth century saw strange trees with uplifted branches and it reminded them of the biblical story of Joshua reaching his arms up to the sky in prayer and leading them to the Promised Land.

Driving up to the ranger park kiosk, you’re greeted cordially and informed that there will be a $20 per day fee to pass through the park. “No problem”, you whisper half audibly, reaching into your wallet to pull out your Lifetime Senior Pass. This pass is the bargain of bargains, as a mere $10 added to reaching the age of 62 gets you and all in your vehicle into all national parks and federal lands free forever. There are some returns on investments of years. (Author note: Beginning August 2017, the fee of this pass rose to $80 yet remains a bargain to frequent travelers.)

Now the adventure begins at 35-45 mph across 45-50 miles of winding roads constructed, you presume, to either force you to drive slowly, or most probably to change your viewing perspective and wonder with each bend in the road. An hour later you arrive at the southern border of the park and following the recommendations of previous park boondocking pioneers, immediately turn off onto a dirt washboard road to pass a scattering of RVers. A mile passes and soon there is no one around you but the awesome vista of the San Andreas Fault valley below and, several miles away, the artery of I-10 carrying silent tiny corpuscles of moving vehicles. You pause for a moment to wonder how the life force in each vehicle could compare to this moment and place.

Camp is prepared, your Airstream is positioned due east/west to maximize the solar tracking across the solar panels that are arranged into position.

Dusk falls slowly and the sky changes from a blue so intense it creates an after-image of golden yellow on your closed eyelids. A hummingbird darts from cactus flower to flower, safely circumventing skewering thorns. Sunlight reflects veins of multicolored layers of geologic history in the surrounding mountains. Mt. San Jacinto, far off in the southwest, provides a midway curtain between Los Angeles and San Diego, layered in shades of bluish grey in the haze escaping that megalopolis. Coming suddenly from behind, you hear a “thump thump!” in the air, and passing above your head a jet-black crow with wings so dark they appear as liquid reflected in the sunlight, alights on a rock 20 feet in front of you. It gurgles and greets you in its indecipherable language, then lifts off to drift in the thermals ahead.

The panorama around is lush with desert vegetation, smoke tree, brittle bush, dune primrose, barrel cactus (which people like to dig up and replant in their gardens, unfortunately), 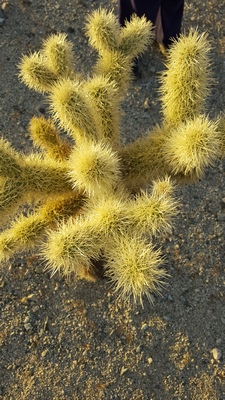 and jutting into the sky around you, the pencil-thin, flowery and thorny arms of the ocotillo. 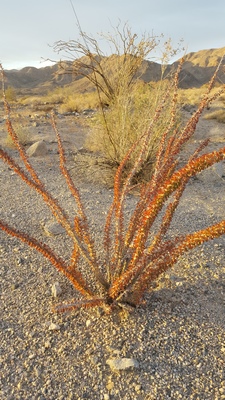 This particular bush looks like spindly ocean coral that, having millions of years of seas erased around it, chose to adapt to living in marshlands, and in ultimate stubbornness stoically stuck to the eventual barren desert landscape.

You become keenly aware of a silence so deep and profound you can hear the blood rushing through your head. In the increasing crepuscular light, small white cotton ball clouds form and close in on each other like herds of sheep gathering into an enclosure, and form into a central lenticular cloud shape

like a huge UFO in the sky. Colors begin to emerge, painting the billowy clouds with orange and eventual fire red as if you were looking into the glowing embers of an upside-down fire pit.

Colors slowly grey away, darkness settles in, an occasional star emerges, and the moon, now full, illuminates the landscape, returning the clouds to an earlier glow. The moon’s new backlight halos rapidly moving bats searching out a meal in those buzzing creatures seeking one around you, their nearly indiscernible radar squeaks guiding them to their prey. You sit meditating in silence, your mind clear and free in the cool air, the weight of sensual overload now weighing heavy in the night. Sleep comes on the gentle breezes.