Two days in Ely, Nevada, over a mile high and founded as a stage stop and Pony Express waypoint, was a stop on our journey; we’ve passed through several times before in earlier travels. The last time, to experience a grand old pastime, sitting at an old-fashioned soda fountain and having real root beer sodas made by hand. Believe me, this stop is worth the trip though Ely, which is looking more and more like a ghost town each time we pass through—so many storefronts closed, an American icon of the West slowly sliding away.

Everything looked the same this time as we walked in and sat down on the red cushioned spinnable stools in front of the counter. I remembered the same woman who served us six years ago who came up and asked for our order. This felt like time travel.

The route south from Ely took us to Rachel, Nevada, the main terminus for all UFO aficionados seeking entry into Groom Lake—more commonly known as Area 51, the famous supposed location of the bodies of recovered aliens, as well as the hidden location of reverse-engineered alien technology.

We traveled to this very lonely and remote location for an entirely different and more closely guarded reason…and if you tell anyone, we’ll have to kill you: the best tuna melts on this planet. We suspect this had to have come from recovered alien recipes. (By the way, we did get intel on the secret route to the Area’s front gate—NOT near the famous black mailbox more commonly sought by UFO watchers. We can be bribed.)

The highway was circuitous, and a light rain was falling as we set off to Rachel. I could see in our rear trailer camera that we were heading a parade of cars and RVs who were unable to pass if they wished to exceed our limit of 60 mph on a 65-mph-posted road. Forty-five minutes passed and up ahead, perhaps 100 yards on the right side of the road, I spied what appeared to be a child (or was it an alien?) standing. It quickly morphed into a four-foot-tall North American Golden Eagle that turned its sharp eyes from its roadside repast to our approaching rig. It was an instant hallucination that instigated exhalations of, “Whoa, Babe, do you see that!?” In an eternal moment, the eagle spread its seven-foot wingspan and attempted to lift off, but not in time to overcome its probable 10-20 pound body weight. We felt a slight thud and Ruth saw in her mirror the tumbling eagle talons spread stretching out to clutch at the shiny aluminum tube as it sped past. 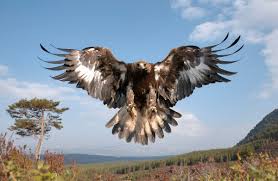 We drove in shock, unable to pull over and escape being hit from behind by the RV shadowing us. I could see in the passenger mirror the front Airstream rock guard and the body panel behind it had been pushed in. Crap! We would have to make a dealership appointment for repair in San Diego, but we have a story for our travel adventure belts, less eagle talon and feather talismans.

We asked for adventure and we got initiated into the Eagle Clan. Our tears and sorrow for your loss, dear Eagle Brother/Sister. We will look out for your family on the road with an eagle eye.