We are now approaching four months of on-road travel; still novices, but patterns are developing. Science does require long term analysis so further study and reporting will be ongoing.

What are our fellow wayfarers driving along the road? Here’s a primer: There are, primarily, Class A, B, C, fifth wheel, and travel trailers, followed by pop-up campers and custom build-it-yourselves, and teardrop trailers.

The highest level and most expensive RV is the Class A, 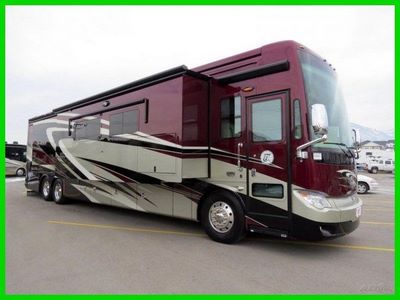 which is built on a heavy duty bus chassis (like the tour buses you see), and a mileage of eight to ten—generally diesel-powered—miles per gallon. These suckers have at least two to four slide-outs, turning a bus into a house living room-sized space, some with fireplaces, and often 40–inch (or bigger) outside flat screen entertainment centers with parallel systems inside, and the interior has the look of a high class condominium. You could store the belongings of a small town football team in all the lockers on board these babies. I am looking now at a rig that just pulled in and the owner is walking down one side and unlocking six lower storage lockers on one side. I can’t see the other side but presume it is similar. For this luxury you will be forking out the cost or more of a house ranging from $100,000 to $800,000! Very often this class of RV is pulling a “toad,” a car or SUV to explore where the beast cannot boldly go. We often see them pulling 10-12-foot cargo boxes with even more creature comforts enclosed. This is equivalent to squeezing your house into a long rectangle, putting wheels on it, and driving down the road. We’re talking 50 to 60 feet long and a little over 8 feet wide.

A typical fuel tank holds 100 to 150 gallons and a fill-up could run $300-$800—do the math. We’re talking about 1,200+/- miles a fill-up. By the way, most regular filling stations limit your gas purchase to $150 to protect against those who “drive and dash,” as this is the maximum a credit card company will reimburse the station, so fill-ups are achieved at truck stops with usually no limitations, but higher fuel cost per gallon.

Class B RVs, constructed on a van frame, are large and maneuverable enough to handle easily, usually have no slide outs, and have a raised roof for standing room.

Toilet and shower are combined in one space. Sometimes you can shower while sitting on the “can.” Don’t even ask. Gas mileage ranges from 18-25 miles/gallon depending on fuel type; the downside is much diminished storage space but with an upside of greater mobility. If you are trying to visualize the difference between a Class A and B, imagine sitting in the driver’s seat of a semi-truck and attempting to make a 90-degree turn in any direction in any urban area. That would be a Class A. Backing up? Forget about it if you are pulling a toad. Class B rigs have the flexibility to back in to a campsite, and range in cost from about $40,000-$120,000. Camper van Class Bs can be covered under an automotive policy whereas Class As need special RV insurance.

Class C RVs are like a studio apartment on wheels, much scaled down but providing some of the convenience of a Class A. Visualize a sleeping area in the rear and one often located in the cab over the front of the vehicle.

These RVs average 10-15 miles/gallon with tanks holding 25-55 gallons. Fill-ups run $80-$400 and you can expect a range of about 500-800 miles/tank. Separate RV insurance is necessary. The Class C type is the most common, as it provides the most bang for the buck in size, range, and cost. Recently, however, we’ve run into a disproportionate number of people who have complained about the quality level of their Class C rigs, as after 2-3 years they have been known to experience roof leaks, electrical problems, and other breakdowns. For that matter this discussion has come up in lower-end Class As as well. A word of warning to any potential buyer of any type of RV: Buyer beware! Do your homework well, quality varies greatly per brand, model, day of week, and planetary alignment.

A fifth wheel takes its name from the wheel-like trailer mount located in the bed of the pickup truck pulling it, similar to a semi-truck connecting to a trailer rig.

Obviously, this arrangement eliminates most of the storage space within the back of the truck, though not completely. Both Class As and fifth wheels are about the same size with the caveat that a fifth wheel can be driven backwards behind a truck and a Class A towing a toad cannot. Maintenance costs are much less in a fifth wheel and as time passes and technology changes, a tow vehicle can be upgraded, whereas a Class A cannot, eventually requiring expensive repairs or complete engine overhaul.

Mileage is similar in both classes and storage in a fifth wheel is usually located up front near the attachment arm to the truck bed. Of course with a fifth wheel you can drop your trailer and drive your truck away, nice when you need to get gas, or go shopping or sightseeing. I’ve seen some disasters in the making with huge rigs attempting to pull into fueling stations with limited diesel pump access and narrow and short bays. We’ve had a few close calls requiring some backing-and-forthing with our Airstream in the past and try at all costs to drop the trailer before attempting these hazardous fill-ups.

Our Airstream travel trailer, I’ll brag, gets infinite miles per gallon…when not being pulled by a tow vehicle.

There are so many angles and considerations in the playing field when you factor in every facet of which RV is best for an application. Our trailer set us back close to $100K, but if you consider the cost of the tow vehicle, suddenly we fall into the high end of a Class C and the low end of a Class A. Whatever! You just have to plot out what works best in as many scenarios as possible.

A travel trailer is similar to a fifth wheel as a trailer, but the latter does have a feature that could give it a leg up. The attachment point between trailer and truck is directly over the rear axle and virtually eliminates the dreaded trailer sway. This is horror to anyone towing, and can quickly get out of hand, leading to catastrophic accidents. A standard trailer needs to have a substantial hitch, properly set up to counter the lateral and vertical forces and blasts of wind created by semis barreling past just feet away in the opposing lane. It can get really gnarly when strong cross winds are momentarily blocked by a semi-truck in the oncoming lane, mixed with tornado passing tail winds, and restored with vengeance as it passes. Oscillations can be created that only experienced drivers can mitigate and a well-designed trailer hitch virtually erases this issue.

We will leave driving skills for potential future blogs and return to nuances and quirky practices often found within the community of our peripatetic voyagers in relation to class, style, and culture. We have seen that a very high percentage of our RV community travel with their pets, and we are no exception.

Dogs are primarily the travel companions of choice, though cats on leashes are occasionally seen as they have learned to stay close to “home” or become coyote bait. Our latest axiom is, “The larger the RV, the smaller the dog.” Ruth and I have a contest to guess, when an RV pulls up, how many dogs will be carried out under each arm or leashed up, binding their owners in an uproar of chaos. I don’t have issues with dogs but these little snarfy, high strung, leg tripping, dust devils push my buttons. We all have stories of high strung dogs with big attitudes. Just today I watched a million dollar rig pull in, and the dog standing on the dashboard like a ship’s figurehead jumped down as the door opened, and two dogs appeared and were leashed. They challenged every other canine in range, pulling against their owner’s lead to the point of standing on two hind feet, barking challenges of confrontation.

All around us every rig has what appears to be the same breed of dog?! Is this some clone conspiracy? Are they using us for their master plan? Is there a buy-one-get-one-free option that escapes us? 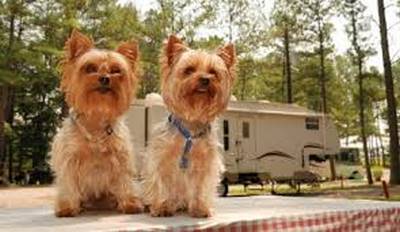 We hope this changes, but so far the bigger and most expensive rigs tend to be the most isolated. They pull in, go through the usual set-up, the slide-outs slowly expand, the stabilizers drop, and suddenly it becomes like the monolith in the movie 2001: A Space Odyssey. 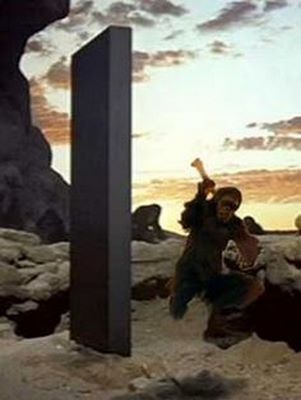 Strange vibrations emanate from within, no one without (except for those pesky little dogs…hmmm?). I’m reminded of my walks through our neighborhood in Marin at night. Passing house after house, the major windows reflected the pixel glows of big screen TVs illuminating the visages of people seated imprisoned around them in trance-like somnolent states.

We’ve had some remarkable encounters with travelers in smaller, Class B and C RVs and trailers, which will soon include our entire nomadic community, in timeless storytelling, questioning, and discovering the wonder of who we are, why we are here, and marveling at the wonder of life we are seeking and finding on our road of life.