Being on the road naturally lends itself to rhythm, the throb of the engine, the thrush and thrum of air pushed aside, vibration of wheels in the contours and cracks of the pavement. I’m reminded of several manmade musical roads. The first is in Lancaster, California,

and if you drive at about 55 mph it is presumed you will hear a sort of snippet from the William Tell Overture. You tell me? You can hear America the Beautiful on Route 66 between Albuquerque and Tijeras in New Mexico at precisely 45 mph.

I remember years ago discovering, quite by accident, a section of road, I just can’t remember the location, where the “asphaltaphone” played We Wish You a Merry Christmas. It’s probable it was taken out to appease the politically and religiously correct. “So how do they do this?” you might ask. Anything that vibrates 330 times in one second in the air will produce an E note. To produce an E note with a car, you have to space the rumble strips such that, at 45 mph for one second, the car hits 330 strips. Doing some math, we find that leaves 2.4 inches between each strip. So now all you have to do is break down the music into chunks of time and spacing for each note. Engineers weld metal bars together in a template, then heat the asphalt with massive blow torches and press them in, and voila! Pragmatically I’ll say this all is just a sneaky way to get people to drive the correct speed.

So we find ourselves in mostly polluted and fantastically exciting Bakersfield, California, 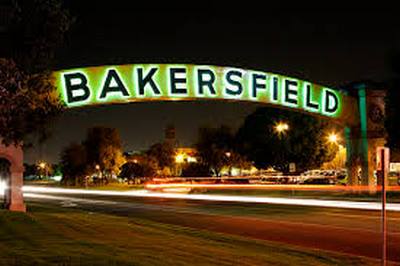 on a replenishment break. The highlight of culture here―besides the location of Weedpatch, a migrant camp featured in John Steinbeck’s novel, The Grapes of Wrath, that will someday be a real tourist waypoint―is the Crystal Palace, built by the late Buck Owens. This is a must see! Museum, restaurant, and musical venue in one place; we moseyed on down for dinner and a concert by the Stampede Band. First of all, ya’ll know Buck? His was a classic story of rising from the depths of sharecropping into country music and TV fame with the show “Hee Haw” in 1969. The Smothers Brothers’ “Laugh-In” was taking a lot of heat at that time for speaking out against the Vietnam War, and “Hee Haw” provided safe entertainment in houses with proudly waving American flags, two cars in the driveway, two-and-a-half kids, and moms in high heels baking Swanson’s TV dinners.

I confess to having a secret appreciation for country music, having spent a number of years living in the mid and deep South, and I lit up when the Stampede Band opened their set with Dwight Yoakam’s Streets of Bakersfield.

This music personifies the “Bakersfield Sound” that developed as a revolt against the slick Nashville music scene. It had its beginnings with the influence of the migration of the Okies, blending with western swing and an injection of the early electrification of the guitar, finding fertile and welcoming homes in honky-tonk bars throughout the region. It is generally believed that the Bakersfield Sound, which is really just a southern California regional creation, became the progenitor of country rock played by groups such as the Grateful Dead, the Eagles, Gram Parsons, Flying Burrito Brothers, The Byrds, Creedence Clearwater Revival, and on through bad boy Merle Haggard, and the previously mentioned Buck Owens and the Buckaroos, and Dwight Yoakam.

You may cast a wry grin my way regarding my fondness for country music (Ruth certainly does), but in contrast to the “asphaltaphone,” there is something about the call of the dance floor, and even just the unconscious foot tapping, leg shaking from that muse in the electric steel pedal guitar, the siren call from the wail of the Fender Telecaster, and the swing backbeat that reinforces my love for Country…but now Bakersfield?

For those of you who have a hankerin’ to explore more musically, specifically on the connections between blues and country, read our extensive blog spot: www.benandruth.blogspot.com .

Scroll to the beginning of: Black Cat Bone and Mojo: Finding the Blues, and travel with us as we follow the routes of the blues from New Orleans up along the Mississippi River on Highway 61 to Chicago.