Mirror: “Humanity’s ego reigns extreme,
but beneath your feet lives some supreme.”

A short stroll here, in the Anza Borrego Desert, remnant dried sea from a distant past, reveals a landscape pockmarked with hilly, funneled interior walls, dark entrances tunneled into the mysterious unknown. 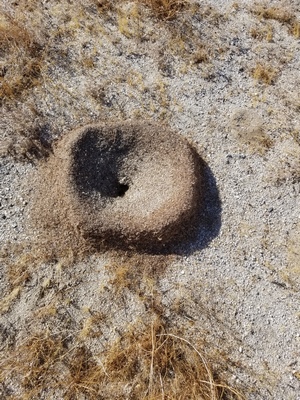 I am reminded of scenes in the movie Time Machine, taken from the H.G. Wells novel, where a time traveler speeds nearly 803,000 years into a future earth where the Eloi, a gentle human species, is preyed upon by Morlocks, apelike creatures who live in wells deep within the planet.

What is this ubiquitous creature/s our mirror reveals reflectively? What better place to discuss species profligation (how’s that for a hundred-dollar word!) than in the desert, mostly considered barren and boring, lacking in life. Wikipedia states that 99% of all living things, numbering over 5 billion species that ever lived on earth, are estimated to be extinct. Estimates of our current living species range from 10-14 million, of which 1.2 million have been documented.

Research reveals that there are 300 pounds of insects for every pound of humans—200 million insects for every human. Now, looking closer into our didactic mirror we see some astounding facts: beneath our feet lives the most prolific creature thus known, the Springtail, or Collumbola, ranging from .25-10mm in length, of which there are 10-200,000 living in each square meter of soil on earth! Incidentally, they are called Springtails because they can flick their tiny tails and spring up to 10 cm to avoid predators.

Here’s a challenge. Get down on your knees with your magnifying glass and get to work studying the microcosm. On every scale, things are eating and being eaten, a mind-boggling silent, scary, munching sound that resounds all over the earth. What value does a thing so small have in our master civilization, you ask? Well, the tiny inherit and create the earth. Springtails are responsible for approximately 20% of vegetative decomposition so essential to plant life cycles.

What controls every millimeter of our earth wherever they live, which is pretty much everywhere? Right up there with the most prolific species on earth, and the creator of our sand-funnel mountains previously described, is the ant, with population estimates of 10,000 trillion to a quadrillion: 1,000,000,000,000,000.

That’s over a million ants per human on earth!

Ant populations are highly prolific and “civilized,” with reported super colonies extending thousands of kilometers’ expanse in numerous locations on earth. It is said that all the ants in the world combined weigh as much as all human beings. This is an amazing fact considering that a human weighs a million more times than the average ant.

As long as we’re talking dominant species, ants can lift 1,000 times their own weight over their heads. Here is an interesting factoid written by Graham Templeton in the Geek.com website:

“Consider a cube with sides 1×1×1 inches. The total volume of this cube is one cubic inch, with a total surface area of six square inches. That’s a six-to-one ratio of surface area to volume. What’s important to understand here is that, with respect to muscles, ‘volume’ is our proxy for mass, and ‘surface area’ stands in for strength; an ant’s muscles function pretty much like our own, with the contractile power coming from fibers on the exterior of the muscle.

“Now consider a cube of 10×10×10 inches; this gives us 1,000 cubic inches of volume, but just 600 square inches of surface—our six-to-one ratio has now become 0.6-to-one. This is because volume, and thus mass, increases according to a cubic function (X times X times X) while surface area increases as a square (X times X times some unchanging constant). This means that, as you get smaller, you also get stronger relative to your own body weight. It’s all about relative strength, though: you could still beat an ant in an arm-wrestle.

“On the other end of the spectrum is a blue whale, a creature so large that it could never have existed on land. Only with the helpful buoyancy of water (and sea water at that!) can a beast that massive hope to even control its own mass; when a whale beaches itself and feels the full weight of its own body, it’s often too weak to even shimmy back into the sea. Similarly, the classic doomsday scenario of a scaled-up ant terrorizing the nation with its super-strength is an overblown threat at best; any ant unfortunate enough to be super-sized in that way would immediately collapse under its own weight, dying a tortured and laborious death.”

Yes, even monstrous dinosaurs, that were growth-assisted by an overabundance of period atmospheric oxygen, submitted to physics in evolutionary size constraints.

I noted earlier that one quadrillion ants, that is, one with 15 zeros, are estimated to live on earth today. The total human population is around 7.4 billion. It is estimated that as of 2015, there have been 108 billion humans who have been born on earth in the history of humanity. Compare these quantities using the understanding that a billion is equal to 10 to the 9th power. I’m thinking there is some species humbling and awe inspiration going on now, eh?

Having said all this, we return, hats in hand, to face our truth-telling Mirror to ask,

“Mirror, Mirror, on the wall, what’s the smallest living thing of all?”

Mirror:
Truth be told, I cannot see,
deep into emerging reality.
Be still, open your mind,
learn facts from fiction,
and soon you’ll be cured
of this mirror affliction.