Who knew there were so many roadside oddities to see, not only in this country, but just here in Texas?

Famed for the Marfa Lights (which were explained years ago, though the town continues to promote the “mystery”), its big claim to fame is that it is where the movie Giant, starring Elizabeth Taylor, Rock Hudson, and James Dean, was filmed. As we drove toward Marfa over the flat, desolate, windy prairie, we wondered aloud why this location was chosen. Perhaps because it is flat, desolate, and windy.

On the road to Marfa is the mostly-famous Prada Store, out in the middle of nowhere. No, its not really a store, just a storefront, used for a movie and then abandoned. 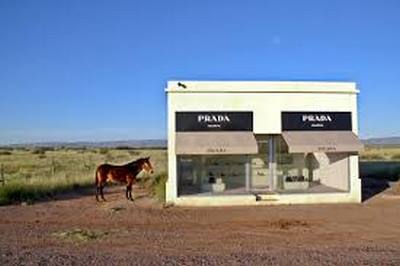 What many people don’t know, though, is that just four miles down the road in Valentine, there’s another storefront, not nearly as famous, but possibly more familiar. 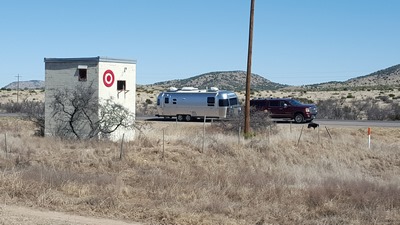 Oh, and Valentine’s other claim to fame? You can send mail here to be postmarked on February 14, from Valentine. With a population of just 129 souls, I suspect it’s their big day.

We arrived in the small town of Marfa and headed for El Cosmico, the local hippie campground/trailer park/teepee & yurt village. 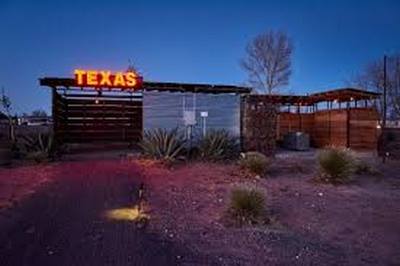 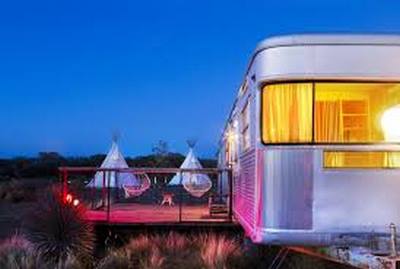 A sall grouping of lovingly restored vintage travel trailers were nestled next to a circle of yurts, with a collection of teepees lurking in the background. A communal bathhouse, wood-fire-heated hot tubs, and an outdoor kitchen completed the hippie commune picture. We loved it; and stayed for two  nights.

In town, the hotels where the movie stars stayed make their reputation with it: At the Hotel Paisano, home of the cast and crew of Giant, we had a cocktail and delicious dinner in “Jett’s Bar.” Across the street at the Hotel St. George, we had cocktails and a not-so-delicious dinner. According to their website, “the original Hotel St. George (which was torn down in 1929) was, for most of the late 19th and early 20th centuries, an oasis for travelers—offering amenities found nowhere else in this corner of the world.” After our long, empty drive to reach Marfa, well, it kinda still is.

The Lost Horse Saloon had to qualify as our favorite haunt, though. We met Carl (pictured here), 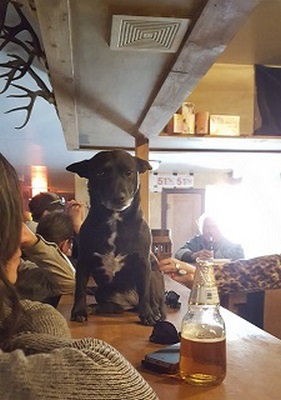 who welcomed us to yet another open-carry state with a friendly lick, then proceeded to fall asleep on the bar.

We had a date with an ancient trailer park in Austin, Texas, for the week before the South By Southwest Festival, so hightailed it east. Not without a stop in the countryside at Salt Lick BBQ, justifiably famous for its barbecue. 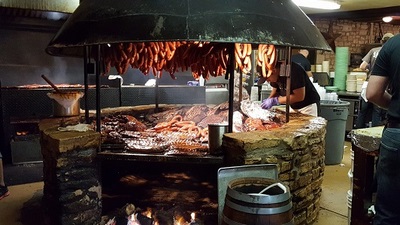 After lunch, on the continuing drive, I noticed that, out here in the middle of nowhere in Texas, people must make their livings however they can. A few of the signs (and I am not making these up): bed & breakfast and construction company; Yee-Haw outfitters; and my all-time favorite: orchard, peach ice cream and taxidermy.

We checked into our RV park (a glorified label, it’s really just a crappy trailer park, except for the location—right across the Colorado River from downtown Austin).

We felt right at home, though, with a collection of vintage Airstreams across the way, and miles of trails to hike with Gyp. Most of the people we met in the park were either retirees passing through, or Millenial hipsters taking advantage of the relatively cheap rent in a plum location.

Right down the street from us was one of Austin’s famed food truck courts, containing the likes of Kebabilicious, Hey…You Gonna Eat or What?, The Mighty Cone, and, my favorite, Hey Cupcake! For dinner, I had an avocado stuffed with chicken and cheese, then lightly battered and fried (because, remember, this is Texas).

You’re waiting for more roadside Americana, right? Well, look no further than the Museum of the Weird,

in downtown Austin. In its purposefully dim interior, we worked our way through the collection of Sasquatch footprint casts, three-legged calves, mummies, and various sideshow gaffs* to be guided to their latest acquisition, the famed Minnesota Iceman. 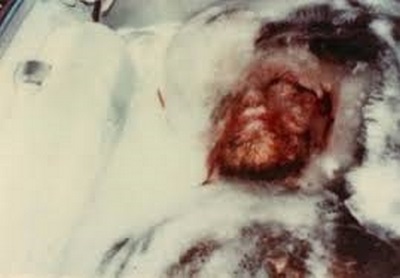 According to Wikipedia: The Minnesota Iceman is a sideshow exhibit that depicts a man-like creature frozen in a block of ice. It was displayed at shopping malls, state fairs, and carnivals in the United States and Canada in the 1960s and early 1970s and promoted as the “missing link” between man and Neanderthals. In February 2013, the Minnesota Iceman was auctioned on eBay. The listing read: “This is the actual sideshow *gaff  billed as ‘The Minnesota Iceman’ by Frank Hansen in the 1960s. This is a one of a kind hoax that was fabricated by a mid-20th century showman.” It was purchased by Steve Busti, owner of the Austin, Texas Museum of the Weird, and put on display so that I could share it with you, dear reader.

Finally, we were treated to a classic sideshow stunt of “nail in the head” by the dapper Eric. I’d have taken a photo for you, but I had to look away, sorry.

* Gaff: Anything controlled or faked, for example, P.T. Barnum’s Feejee Mermaid. A gaff isn’t a genuine freak of nature, regardless how convincing it looks, but a specimen manufactured to look freakish.

It ain’t Texas without a rodeo

Half rodeo, half country “music” concert (forgive the quotation marks, but you all know that I believe “country music” to be an oxymoron). I negotiated with Ben to sit through an hour of the twangy Dwight Yoakum so that we could see the first finals of Rodeo Austin. More about the rodeo coming soon from the talented pen—erm, keyboard—of Ben. But my impression? Super-fun, and I got myself on the rodeo circuit mailing list.

We blew out of Austin just before the SXSW Festival began, and headed south to San Antonio. Well, you can’t visit San Antonio without everyone encouraging you to visit the Riverwalk and the Alamo. The Riverwalk is, essentially, a crowded tourist mall, lined with mediocre restaurants, expensive and crappy gift shops, and hundreds of fat-butted tourists weaving around in oblivion, or sitting listlessly in the countless tour boats that float past, a bored guide monotoning some quasi-historical fact or other. 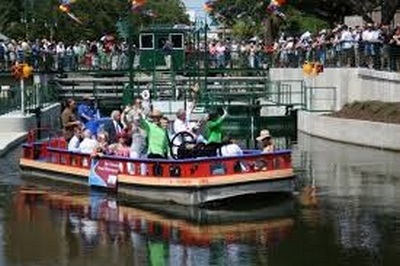 My advice? Skip it. Unless, of course, you can travel back in time, to 1911 when the Riverwalk was the largest red-light district in Texas—it ranked third in the nation. In fact, the district was so popular that a guidebook was published directing you to all manner of establishments, such as road houses, cock-pits, and, of course, brothels. The 25-cent booklet states, “This Directory of the Sporting District is intended to be an accurate guide to those who are seeking a good time.” And the Alamo? As “hallowed ground and the Shrine of Texas Liberty,” it does its job. As to the reliability of the “history” they promote, well, as I’m so fond of saying, don’t believe everything you hear, check it out for yourself.

Rounding out our tour of little-known places to visit, we headed for Barney Smith’s Toilet Seat Art Museum. Retired Master Plumber Barney Smith started creating his one-of-a-kind toilet seat art about fifty years ago using toilet seats that were set to be thrown away, and, as of January 1, 2017, has completed 1,240. Each seat is unique, commemorating some person, place, or event, such as Michael Jackson, San Francisco (which we autographed, natch), cosmetic dentistry or leathercraft, or the Mt. St. Helens eruption. We spent a happy half-hour chatting with Barney, who loves to talk about his work and, just when you’re working your way out, will say, “Wait! Here’s one about …” and you’re sucked back in. 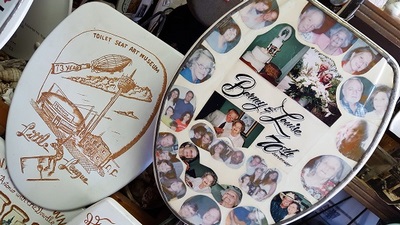 At the end of the day, a visit to Monster Mini Golf in a nearby mall was a great way to work off some traffic stress. Now, I don’t normally go in for mini golf, but the pictures say it all. 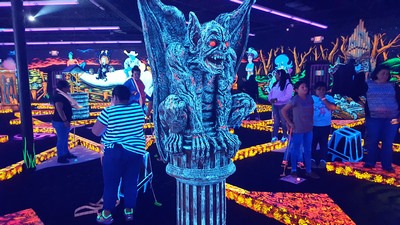 Lastly, cocktails at the Buckhorn Saloon and Museum and Texas Ranger Museum, featuring the Carnival of Curiosities and the American Sideshow; the only museum where you can enjoy a cocktail while you stroll the exhibits. The collection of stuffed animal heads here rivaled the one at Foster’s Big Horn in Rio Vista, California, and when questioned, the bartender said, “We have every animal here.” Every animal? I challenged him with the Foster’s Big Horn platypus. “Oh, well, no, we don’t have a platypus.” Drinks on the house.