As we drive north through Maine, the passing geography changes decidedly. The earth begins to take on a rich mufti of red, green, and brown mostly unseen in the Lower 48. Around 20,000 years ago, the on-again-off-again ice sheets had made their way all the way down to New York City, reaching a height of over 1,000 feet over present day Manhattan. During the last retreat, this massive ice field scoured northern North America, leaving behind pockets of giant boulders, trenching out the Great Lakes, and creating the craggy stunted forested muskeg barrens, lurking above permafrost in the far north, where they reside to this day. Again, we uncork geological time from the genie’s bottle and observe a landscape in flux. Around the same time that the ice sheets were deserting the Big Apple, across the country in the San Francisco Bay Area, you could have stood high above the series of misty water falls cascading below the Golden Gate that today lie hidden under hundreds of feet of water. And you could have watched rainbows set over the hills of the Farallons. You could lasso your pet woolly mammoth and hike the broad marshy plains 27 miles west to catch the last dip of the sun over our western ocean shores. But let us not digress!

A memory percolated up from our travels 20 years ago in the Yukon and Alaska: muskeg! This term originated from the Cree Indian nation and describes dead plants in various states of decomposition: a boggy, marshy, peaty, acidic soup with large concentrations of sphagnum moss that can hold fifteen to thirty times its weight in water. This combination allows all of this slurry to sit on sloping surfaces in a relatively unfertile state, supporting beaver, mushrooms, various other organisms—oh, and of course—the three amigos listed in the title of this post. Often muskeg exists over resident permafrost, blocking water drainage and creating unfavorable conditions for tree growth. As we drive along, we observe stands of miniature bonsai-like trees and dead spindly tree trunk skeletons forlornly silhouetted against the background. Large quantities of rain and cool summers retard the normal decomposition of organic material falling to the earth that is found in most forests. Organic decomposition slows down in these anaerobic conditions, hence the surface of the earth, while appearing to be solid, secretly hides a layer of peat often up to 100 feet deep. Those of you familiar with septic systems know that aerobic bacteria are the friendly, able codependents in the decomposition of waste, giving it a fresh earthy aroma; unlike the nose-holding, anaerobic stench that can arise from oxygen-starved, acidic muskeg.

Although the appearance of a fine mossy surface may be inviting, great danger can hide below for the unaware. Vehicles have sunk beneath its unanticipated penetrable membrane. 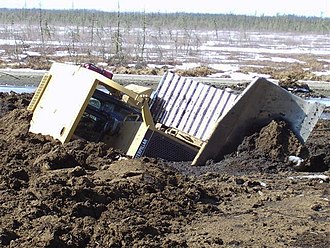 Moose, which are cold-adapted but have low heat tolerance, love to forage within the forest grasses as well as within the muskeg, finding the coolness of these boggy areas both nourishing and a respite from the massive swarms of mosquitoes that thrive just above the bogs’ surface in summer. Thus exists a symbiotic relationship between the massive moose and the miniscule mosquito—much to the moose’s chagrin, probably a one-way symbiosis. Conceivably, the moose’s long spindly legs are an adaptation allowing it to graze comfortably within the muskeg’s welcoming cool protection. That which protects can unfortunately harm, and moose can unknowingly wander beyond the supportive shelf beneath the surface to become trapped, just like the bad guy in those misleading Hollywood quicksand death portrayals. Moose (the irregular plural of a singular “moose” is “moose”) have been observed to walk out over the muskeg and become trapped and drown below its surface. 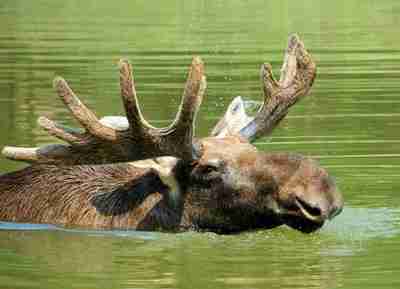 The aforementioned mosquitoes find muskeg the perfect breeding ground after the spring thaw, and are consumed by a blood lust, with the unfortunate moose providing a perfect feast. Here is a Youtube video of moose and mosquitoes in the Chena River in Alaska.

Muskrats are semiaquatic rodents that live prolifically throughout the U.S., though they take their name from the words of First Nations tribes describing their color (red) and the musky odor they exude when mating: Muscascus or Musquash. Native tribal languages can be fluid when translating. The creature was sometimes called the musk beaver due to its flattened tail. The muskrat moniker was due to its resemblance to the rat but is a misnomer, as it is not a member of the Rattus family. 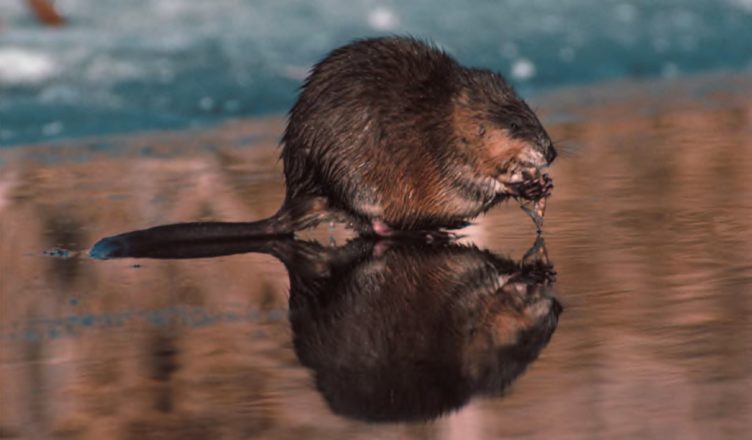 Muskrats share a unique adaptation similar to that of whales and seals in that their bodies are less sensitive to carbon dioxide build up, and they can close off their ears to keep water out, hence they can remain under water for as much as twenty minutes.

Muskrats live in constructed “pushups” along rivers and lakes similar to beavers and some scientists think they may share a sort of symbiosis with beavers: Beavers build the dams that provide the aquatic environment that supports muskrats, who in turn eat the vegetation that surrounds beaver lodges, enabling them to spot unwelcome invaders. Beaver and muskrat kits have been observed playing together and in times of danger have often shared the same protective lodges. Both species live in close proximity to each other and continuing study seems to be revealing that muskrats are studying beaver construction techniques? Hmmm…are we recognizing the cross-species transmission of knowledge?

What sort of conversations do couples have who travel full time and spend consuming hours on the road in transit, or sitting by lonely, hoary, forested campfires? The development of the beavers’ skills to determine proper trees to chew down, drag, and construct semi-aquatic lodges employing careful engineering methods, and passing this information down through the generations? This could be one such.

Muskeg creates serious problems for road building. If it is not cleared away down to bedrock, thawing conditions will contribute to vehicles sliding into the bog, much like our previously described moose. So-called corduroy roads are often constructed by laying logs over boggy areas and covering them with thick clay, rocks, or a geotextile fabric to create a temporary surface that lessens damage to the muskeg. 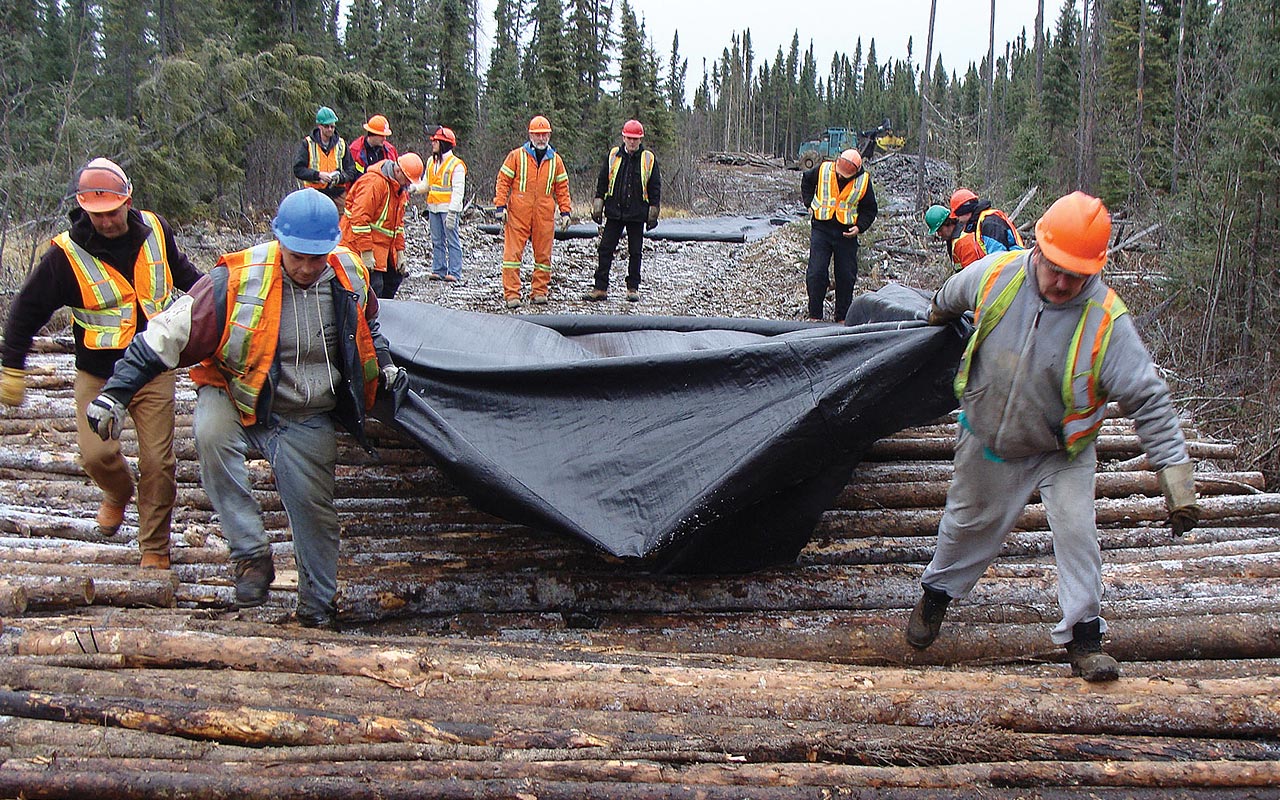 Further north above the Boreal (sub-arctic circle region), ice roads are created by clearing the insulating snow away and spraying water on the hardening face of the muskeg, allowing passage to fleets of oil and gas trucks.

Later, we’ll explore another fantastically similar boggy environment that exists in a hot climate, the Okefenoke Swamp, but what’s the difference between a swamp and a bog, and is there any purpose for such an environmental oddity other than the generation of pesky mosquitoes?

Muskeg: Why is it important?

A deeper assessment of muskeg’s environmental importance across vast swaths of northern North America is its carbon storage capability. Our narrow, short-term consciousness masks the recognition that what we flush away doesn’t go away—what we throw away or burn doesn’t disappear. The earth is a sealed environmental system that recycles itself in time. Carbon from volcanic, earthly, and manmade chemical emissions passes between the gaseous atmosphere and the earth, changing the overall environment for tens of thousands of years. My previous posts have discussed this in detail. Greater atmospheric carbon buildup creates global warming and all the repercussions of these actions. Earthly epochs at times have locked this carbon up in soil, oceans, and in our muskeg in vast quantities. Geologists have traced ancient swamps and bogs long buried during tectonic shifts to gas and oil reserves. The preservation of muskeg, this seemingly barren vastness, is for us an energy and life force bank account to be appreciated and cherished.