The trouble with writing an ongoing blog is, well, you can easily get sidetracked. We got sidetracked by New Orleans. Those of you who know us well will not be surprised. Between some of the best food to be found anywhere and drinks-to-go, it’s a difficult place to focus.

We parked the Silver Submarine at the French Quarter RV Park—a bit of a misnomer, as it’s a couple of blocks from the Quarter proper, but within easy walking distance, which was the main thing.

Our first stop in the Quarter is always the Clover Grill. Open 24 hours a day, and serving the “World’s best hamburgers.” And they’re right. It’s a tiny place, made famous (more’s the pity) by the film Benjamin Button.

Our first real dinner was at our favorite restaurant, Irene’s. Irene DiPietro opened this French Quarter beacon of garlic and red sauce in 1993.  It is at once a cozy, lively, busy, homey place. We started with soft shell crab and bruschetta. Since there were four of us (welcome, Jen & Casey!), we were able to sample dishes including a pan-seared freshwater drum (comparable to snapper); duck breast, roasted crispy and glazed with a raspberry pancetta demi and topped with pecans; and Irene’s signature grilled lamb chops with roasted garlic mash and sauteed haricot verts, then finished with a rosemary port wine demi glaze. There was one more dish that I confess I don’t remember. Then, desserts. A bread pudding redolent with raisins and warm bourbon sauce, and a key lime pie with delectable sweetness.

On Saturday, Ben and I walked about 40 minutes to Bywater for the Drag Brunch at The Country Club, “a neighborhood secret for over 40 years.” We had a delicious brunch: Ben had chicken and waffles, and I had debris topped with poached eggs and hollandaise. For those of you who don’t know what debris is: it’s pronounced “DAY-bree.” 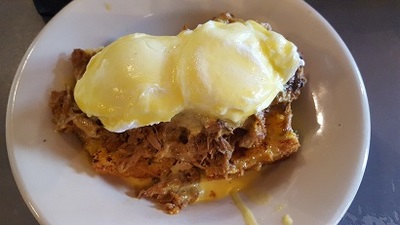 It’s the crispy ends of roasted pork that are left in the pan when you pull out the roast. Doesn’t sound like much, but all the flavors of the roast and its ingredients, mingled and cooked into pulled pork heaven.

That night, we went to a live performance of Biloxi Blues, the Neil Simon semi-autobiographical play about Eugene Jerome, a young recruit who enlists in the army at the end of WWII. He is shipped from his home in Brooklyn to basic training in Biloxi, MS. At boot camp, Eugene is antagonized by a manic drill instructor and is introduced to adulthood through his experiences with a diverse group of young recruits, a Biloxi beauty, and a local prostitute. The performance was put on by a talented ensemble cast at the World War II Museum in the Warehouse district. This being New Orleans, the play was accompanied by wine and a delicious dinner of braised short ribs—not your typical dinner theater fare, but right up there with some of the best food we’ve had.

Easter Sunday dawned with breakfast at Elizabeth’s in the Upper Ninth Ward, a bustling little place with amazing food.

We started with calas: dumplings made of cooked rice, yeast, sugar, eggs, and flour—then deep-fried, sprinkled with powdered sugar, and served with honey or maple syrup; they’re like beignets with a punch. Though the rest of the breakfast was, indeed, deserving of the “best breakfast in New Orleans” title, it was the calas that made the meal.

After that, we wandered into the Quarter and found ourselves along the Easter Parade route. Unlike bigger festivals like Mardi Gras, the Easter Parade route had plenty of open space to sit on stoops or doorsteps, or stand on the curb and dance along to the music. You won’t be surprised to learn that I did the former, while Ben did the latter. Here are a few pix of the parade: 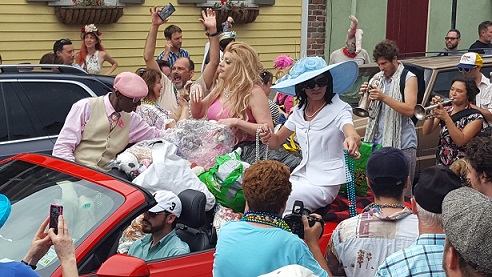 Later in the afternoon, the Gay Easter Parade was scheduled. We walked over to that parade route, bought a couple of cocktails and found a perch to watch the parade. Here are a few photos of that:

That night we went to Frenchman Street and wandered from club to club: blues, jazz, and R&B filled the air. Some of the best music came not from the clubs, but from street musicians in doorways along the avenue. 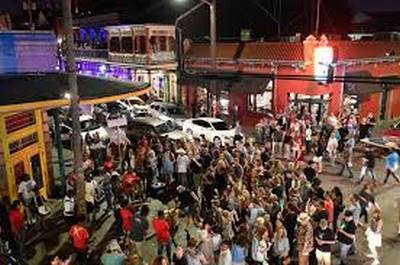 After they left, we strolled back to the Quarter for the must-stop at Café du Monde, not at all crowded during the week, for the de rigeur beignets and café au lait. 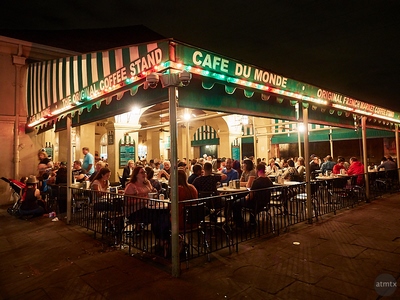 On our final day, we drove to the Odd Fellows Cemetery, reputed home of the Gates of Hell. Although we knew it was closed, we also had heard through the grapevine that we could talk our way in with an “offering” and the name of a deceased, both of which we had (though we may have incurred the wrath of the dead by stealing flowers from a nearby graveyard).

The only way out of the cemetery is by calling a number written on a matchbook—Satan’s own cellphone, perhaps?

Alas, alas, when we got there, we found a phone number to call, but the person on the other end, instead of sounding like the Prince of Darkness with flames in the background, sounded just like an ordinary guy with daytime TV in the background. He apologized and said he could get there in a couple of hours.

With no time to wait, we made the excellent decision to skip the Lake of Fire and instead visit Dooky Chase’s, in the Treme, for lunch. We were shown to a table—perhaps the very same table our hero, Barack Obama, sat in when he visited. The story goes that, when he reached for the hot sauce to add to his gumbo, owner and chef Leah Chase gave him a double barrel of “Oh, no, you don’t!” 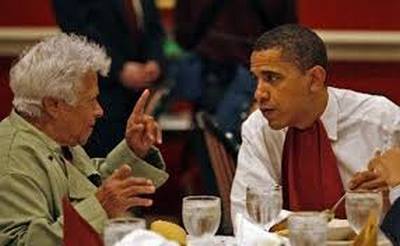 The real fame of Dooky Chase’s, however, comes from the time when blacks and whites couldn’t eat in the same restaurant together—except at Dooky Chase’s. Miss Leah knew that no one would be arrested in her restaurant or a riot would break out. Therefore, all civil rights meetings in New Orleans took place inside. Miss Leah, now in her 90s, has been working the restaurant since 1957.  This largely self-taught “Queen of Creole,” who never measures an ingredient—she measures the results—has been inducted into the James Beard Foundation’s Who’s Who of Food & Beverage in America and honored with a Lifetime Achievement Award from the Southern Foodways Alliance. [Author’s Note: We read recently (June 2019) that Miss Leah recently passed; another icon disappeared to time.]

We had the lunch buffet of salad, corn and crab soup, red beans & rice, dirty rice, spicy sausage, meatloaf, and—

now you find out—The Best Fried Chicken on the planet. Followed by a fresh peach cobbler, right out of the oven.

The next morning, we packed up, somewhat sadly, but ready for our next adventure—Mississippi, here we come!