Seeing a rodeo was big on our bucket list, and Rodeo Austin—our San Francisco-away-from-home in the middle of the conservative melting pot of the Lone Star State—would be the host. We’ve been talkin’ ’bout goin’ to this halfway across this fine country. Well hell, we’ve got our boots, hats, belts, and sheep dog, and we’re falling steeply into an easy drawl as we speak with the locals. To top it off, despite Ruth’s cringing reluctance, Dwight Yoakam is the musical headliner at the first night of the show. My earlier years living in the south inoculated me to the musical brand, gotta say.

In driving rain, we pulled into the huge gateway to the rodeo and fair ground causeway, inching our way in the vehicle throng to pay the $10 dollar parking fee. This granted us permission to be waved into the vast expanse of field mud, muck, and rocks, to park in anonymous rows…ruh row. Finding our horse upon return is going to be one heck of a challenge. “Not to worry,” I said to myself as I pulled out my cell phone parking app and clicked Current Location.

The carnival midway was lit up like Vegas on a Friday night, but the driving rain rendered attendance on the rides to close to zero. The colorful lights refracting through the rain drops made the scene an island-like mirage likened to a scary clown carnival movie set, and if you’ve seen the 1962 film Carnival of Souls, well…

Disappearing into a dark hole of hell was not to be our destiny that night as we soon were encapsulated into the throngs of people working their way into a huge oblong interior stadium with seating all the way from ring side high up into bleachers. All seats were ticketed, though not necessarily practiced, and folks competed politely for better seating. There was a fair share of reluctant shuffling through the tight rows—like everything else in Texas, most folks are BIG. In order to get to our seats, however, we had to pass through the portals of commercial chaos, venders selling everything western, from clothing, hats, belts, accoutrement, household art, farm equipment, animal supplies, and of course the ubiquitous beer and refreshments of the baser kind. We discovered, after seating, someone drinking one of Ruth’s favorite ciders and this synergized her rodeo experience. The wait in line for said drinks though, rivaled that of ladies’ restroom lines in a rock concert.

Just as my drink purchase finished, the stadium lights fell, and in the darkness an attractive young filly—woman, that is—rode out into the bright moving searchlight on a stunning pure white horse carrying an American flag and rode in synchrony and circles to the music. 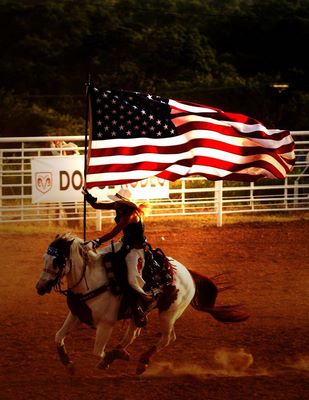 All hats were off, everyone standing, many with hands over hearts. The rowdy rumbling crowd transformed itself into a silent, worshiping unified mass of damp eyes and trembling patriotic hearts. As the “…land of the free, and the home of the brave,” stanza completed, a monstrous cheer arose from the throng. Capturing the moment’s ardent devotion, a video appeared on the massive center ring screen portraying all-American western scenes and images from the rodeo’s past. We had arrived at our destination.

When you’re going to have a baby, and of course you’re planning on having your kid take up rodeo, your choice of names may just make the difference between winning and losing. These are the actual (we presume) first names of the contestants:

Now these are names to reckon with!

Watching this extravaganza is mind boggling in its complexity, hand-eye coordination, strength, and damn-sure tenacity. Tossing a lasso at full gallop to capture a running calf’s legs while your partner at the same time lassos its head in approximately seven seconds takes countless hours of horse, calf, and human exercise. Watching any bareback or saddle bronc or bull riding makes you cringe as you image the G forces racking your body and the feeling of being thrown from your mount countless times to acquire these skills, renders your knees weak. Certain areas of a cowboy’s anatomy would be the first to agree. This is a young man’s sport, to be enjoyed by us thankful spectators. I can’t imagine what drug could remedy the pain both short term and long from this sport. Perhaps this explains the rodeo’s popularity? This is spectacle, not only of skill but raw physicality that we perhaps all envy when it is past, if it ever came.

On the other side of the coin is the ever popular mutton-bustin’, where 3- to 9-year-olds take turns being hoisted up on the backs of sheep to see how long they can ride before dropping like full ticks off a dog. This is a real crowd pleaser, as everyone waits to see the wackiest position a kid can wrangle themselves into while barely grasping their woolen reins. The poor kids looked kind of lost in the exercise, not really sure what the heck was going on, and too young in most cases to develop a complex based on being laughed at by a crowd. At the end of this “Joke’s on You” exercise, each kid got an identical trophy regardless of time riding, not exactly the kind of message of winners and losers in life to portray. Incidentally, there is actually a phobia of sheep believe it or not called Ovinophobia. Put that in your woolen drawer. It may well be that some of these kids will go on to look up that definition later in life…or they’ll move on to horses and bulls. By the way, did you know that there is also a phobia of horses and bulls too: equinophobia and taurophobia?

No rodeo is complete without the ubiquitous clown, which in this case proceeded to make a fool of himself and the crowd, hey…isn’t that what a clown is for?! 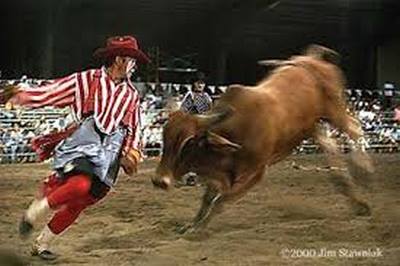 You got your clown arguing with the announcer, clown stealing a fan’s cell phone and looking up texts to read to the audience, clown spearheading vendor giveaways to sections of the crowd, clown leading crowd cheers, clown climbing in the classic clown barrel to be head butted by angry, agitated bulls. That was my favorite activity for that clown, yep justice.

And the moment we’ve all (mostly, except for Ruth) been waiting for! Tractors pulling trailers piled into the stadium loaded with sound equipment and a platform that folded out into a revolving stage. Dwight Yoakam’s roadies put on a premiere performance of setting up in 20 minutes for a band of five members and all their gear; very impressive. Unfortunately, the acoustics sucked in the stadium and you had to really struggle to get the words to the music. 99% of the songs were Dwight’s hits so the crowd, knowing the music, sang along…yes, me too in places, though Ruth struggled with this. I helped her with one of the lines in the truck later though:

“I’m a honkey-tonk man, and I can’t seem to stop,
love to give the girls a whirl to the music of an old juke box.
When my money’s all gone, pick up the telephone, say,
‘Hey hey, momma, can yer daddy come home.’” Yep!

One hour of solid music passed, including a tribute to the late Merle Haggard, and people intuitively sensed that if they didn’t leave then, they would be in a world of traffic hurt. I didn’t, thanks to undying Dwight fever to the last. Ruth and I agreed to meet at our entrance point to the stadium, and she gratefully bolted. I should have followed her, as how often do we forget that everyone leaving at once is not the same as everyone coming in over a period of several hours. I stared at my parking app in the rain for several minutes until Ruth took control and said, “Just follow me.” Our horse was tied where we parked her, and as is often the case, every one of the thousands present appeared to leave ahead of us on the one-lane exit road. Then there was the road construction on the streets of Austin that rivals that of the worst of any city I’ve ever seen. But that friends, is a different story!