In the evenings at Goose Lake, Gyp was pleased to take a walk with me to the far end of the park across the Southern Pacific railroad tracks that carry weekly lumber mill runs from Lakeview, Oregon into building-hungry California.

One day as we stepped across the creosote-infused rail ties, I spied a lone, grizzled old man sitting at a concrete bench drinking a can of beer. We exchanged pleasant “Good days,” and by this time, Gyp had made her way a hundred yards ahead to where a stream burbled across a field trackway, waiting impatiently for me to throw the stick into an inviting dog paddle immersion pool.

I regretted not seeing the old man as we returned home and vowed to myself that if we met again I would have him relate stories to match the lines on his face. He would have much to tell, for sure!

Another ambulation with no contact left me with a driving desire to meet him. For some reason I just had to talk with him, so when a park ranger drove by one day, I asked her if she knew of an old man who hung out across the railroad tracks. She lit up and said that he was quite a famous person, and lived just across the double yellow line on the road coming into Goose Lake Park, separating California from Oregon. You can go into Four Corners and stand in four states or you can step across the yellow line from Oregon into Ray Johnson’s simple California home. 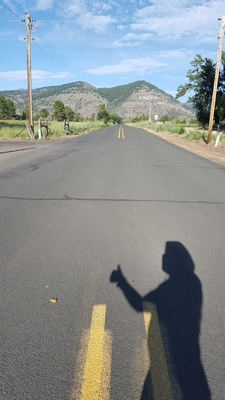 In these crazy times one must be guarded against walking into a stranger’s yard, there could be a shotgun poking out through the window shades or an angry pit bull tethered at the end of its leash, hopefully secured, seeking an unprotected thigh to appease its master. There was just silence and then, after what seemed a lifetime since my knock at the door, it opened and a bearded, wrinkled face and head emerged to ask my business. We both instantly recognized our previous introduction and I asked him if it would be okay to come back later in the afternoon with Ruth. Ray was all for it, and we returned to open Pandora’s life story box.

As it turned out, Ray had a musical talent as a young child in the forties, and in school became interested in the accordion. He showed us pictures of himself wearing it across his body like an oversized foot locker dwarfing his childish body; and there were pictures, lots of them, many of uncles in World War Two, fighting the Germans. There were images of parents and family, young and fresh with hope from war’s victory, prizes taken from the dead on the battlefields; and a photograph of Ray, newly returned from fighting in Korea, trading a rifle and psychologically damaging battlefield experiences for that ever familiar and comforting accordion. Looking at his image in the musical quartet photograph, and now here before me (Ray is on the far right in the picture on the left, and in the middle in the right hand picture), 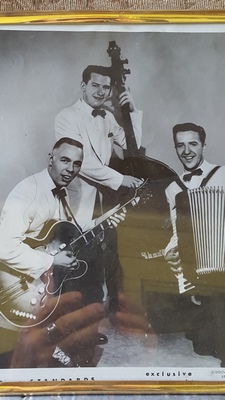 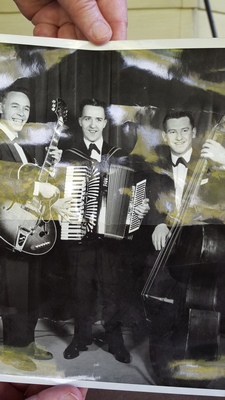 I had to do a triple take. A lot of life passed under that bridge! 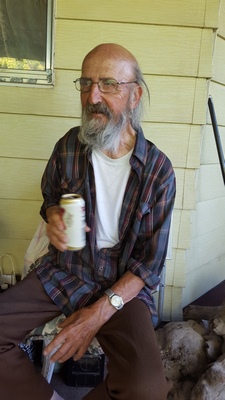 We were to learn that Ray had played the musicians’ circuit for years, traveling all around the US working with all the musical greats. The list and the stories were long and many. Ray recounted one time when a long black limousine pulled into his driveway and a chauffeur stepped out and opened the passenger door for a woman Ray didn’t recognize. The opposite door opened and immediately the familiar face of Willie Nelson

appeared, joining his fourth wife on Ray’s porch to share stories of their previous lives in the Pacific Northwest, when Willie worked as a disc jockey for a radio station, and they had crossed numerous musical paths. 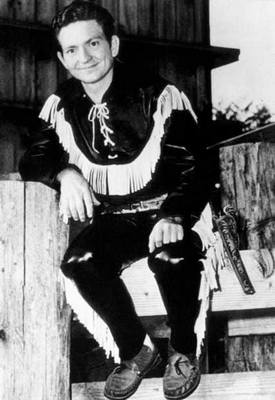 Musicians are an incestuous lot, crossing each other’s paths countless times. Ray and Elvis (The Las Vegas version, not the real one, according to Ruth) met occasionally, catching parts of each other’s shows. The Colonel kept a tight rein on his charge, though, and Ray’s friendship with Elvis was never allowed to blossom. How can you condense a lifetime into hours? There were so many questions to answer, driving a flood more. We had to adjourn to the next day, which stretched from our first two hours into four. We told Ray that we had heard enough of his stories of playing and now it was time to see and hear the real deal. There were more stories of meeting up with the Rat Pack, Sinatra’s shows, folk, blues, jazz, country, and lesser-known and famous musicians, an amazing gallery of talent in time. Again we beseeched Ray to play. He promised that the following day he would pull out the squeezebox, and Ruth and I looked at each other with the look that secretly says, “This guy is stalling to antidote his loneliness.”

Oh, and did I say that Ray wondered if we were going into town―fifteen miles away―could we pick up a case of beer for our next meeting?

Our third visit crossing the double yellow line became a six-hour story and music fest. Our intrepid peripatetic musician apparently hadn’t played in quite some time and his old fingers struggled to find their way to the designated keys.

Have you ever been asked for a song suggestion and been at a loss to think up anything? A number of times Ray would call for a song and we said, “Hey Ray, you’re the musician, play what you want!” It wasn’t until much later and we had moved from his house to the mosquito-less comfort of our Airstream, and the clock had long ago stuck twelve bells, that Ray slapped himself in the head with the revelation that he had notebooks filled with plug-and-play songs.

The moral of this story is that when you see that lonely old person, take the time to engage him or her. You could be in for a hell of a ride, and the person you meet could find immortality in story.