Zephyros
Ah, Joshua Tree! We find ourselves again at a favorite boondocking site, just adjacent to the National Park border, with the I-10 corridor’s blistering fast cell and data connection. Every iteration is a learning experience, and this time we come armed with a simple elegant phone app that locates east and west to align our solar directly south for energy maximization. We are now positioned with our awning north-facing, and winter sun creates a solar reflector off the aluminum skin at all times of the day. Thanks to Vinnie Lamica’s polish job, we can be seen from miles away, easy to signal the cavalry if attacked by rampaging zombies or wind-blown jumping chollas—probably the most deadly cactus on the planet!

Days One and Two passed in serene bliss: warm days and a night sky lit like millions of shotgun shell blasts through a black, back-lit canopy. We lit our propane fire pit, sipped evening libations, and read to each other, pausing to tell stories and anecdotes.

But an onslaught soon blindsided us. Weather reports are notoriously fickle and inaccurate, as everyone knows. Early the following day, I sat outside basking in the silence of the desert, scanning the northern mountain ranges. Layering rock and strata patterns revealed shades of varying browns filled by meager earth footholds, patches of green vegetation in their grasp below folded peaks sharply contrasting a cerulean sky. While mentally free-floating, a subtle ghostly apparition began to cloud the clear view with a growing smoky haze, though no telltale olfactory signs emerged. The distant ranges disappeared into an unseen dimension, replaced by a cold wind seeping across the landscape, like a darkly magical Etch a Sketch-erasing moment. Mean winds obscured the prospect of all that once sat in stillness, knocking chairs over and disheveling all that could not stand in its insistence. The temperature dropped by twenty degrees, and it blew and blew….

The French experience Le Mistral meaning “master wind.” This dry cold northerly wind blows in squalls toward the Mediterranean coast of southern France, tormenting people for weeks on end, and has driven people mad. They say even murder is forgiven after a week of Le Mistral! “If the Mistral blows for nine days, then a murder on the ninth day was treated as a crime of passion, not as a cold-blooded murder,” states Professor Marion Diamond, University of Queensland. There is also the Sirocco which blows from north Africa across the Mediterranean to southern Europe. Web search reveals at least 75 different world culture names for winds to include: Bayamo, from Cuba; Chubasco, Central America; Haboob, Sudan; Nor’easter, from guess where?; Santa Ana, southern California; Williwaw, Aleutian Islands; and lastly, Zephyros, from the ancient Greeks, to name just a few.

Returning back to the “driving people mad” statement, we scurried into the Silver Submarine in haste against the onslaught, and sat while the Airstream shook violently despite being firmly anchored by stabilizers and weight of body and contents. There was no let-up from wind blasts growing in intensity at times close to around 50+ miles per hour. Orienting our rig east-west opened our long sides to the full force of the northerly wind; opening the door against this took every bit of strength to the critical balance point where the wind chose whether to pull it open for you, or slam it closed and induce ear trauma. If you’ve ever experienced an earthquake magnitude about 4–5 on the Richter scale, you can appreciate our growing apprehension. The only barrier from madness was the arrival of our friend John, who was passing through to explore the East Coast and graced us with hours of debauchery and insightful storytelling. His plans to tent in our camp quickly became laughable.

Two days—and many libations—later, the relentless wind carried him away east, leaving us to ride it out to acceptable levels after four days of Zephyros’s torture.

Being on a rocking boat for days on end and stepping on shore brings reality to the term “sea legs,” and post-wind we walked around camp like drunken sailors…or was that still the effects of our two-day liquid libertinism?

Tracks of Time
One of the secrets to successful boondocking is minimizing water use and discharge, in the form of grey water wash and black water human waste. We were luckily located far enough in the “boonies” to trek a short distance into the remote desert expanse with shovel, and explore flora, fauna, and geographics as we kept our trailer black tank light. It is interesting to note how rare rain water flows in the desert, moving through the pathways of least resistance. It was on one of these duty jaunts that I came across a section of hardpack mud, where the water had pooled until it found release. Post-rain squalls, water disappears instantly here, and it left behind, in this case, a smooth surface suitable for recording tracks of movement before quickly drying into hard pan.

On the island of Crete, encased in mud, researchers discovered the nearly six-million-year-old tracks of what appear to be human, or close to human, footprints. 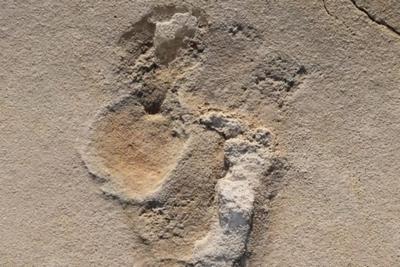 Ape foot prints present themselves remarkably different, so these newly discovered impressions are serious contenders for human origin, or at least a branch off ape-like ancestors closer to our own. The closest confirmed human footprints discovered so far are in Laetoli, Tanzania, and are dated at 3.65 million years.

Studying tracks and traces is a fascinating detective pastime, opening up the wonders of creatures that passed previously invisible. Animal scat is another intriguing study along this theme and I was about to carefully bury mine forever, but a side glance to a hardpack section of easy walking revealed numerous human and animal tracks and traces. The hoof prints of deer registered clearly.

In the study of animal tracking we learn there are hoppers, draggers, and walkers, both four foot and single track, which category deer fall into. Directly adjacent to the deer tracks and close in time were the markings of human habitation: a fire ring, bike tire tracks, and graffiti scratchings. Humans never reflect much order or efficiency, and usually exhibit a non-discerning scream of existence. In my daily desert duty hikes, I found medicine pill bottles filled with marijuana, various alcohol bottles, cans, plastic containers, bags, and—richest of all, scratched into the dried mud to await the layering of perhaps millions of years, and eventual discovery by some distant civilization, if such exists—this graffito:

Enjoying our blog? Want to read more? Hit the FOLLOW US button on the lower right. And tell your friends.