What do you do when you’ve visited a town several times a year for over 20 years, after having grown up there? You find a theme to fill your days, that’s what. And this time, I decided on: “San Diego restaurants in continuous operation since before 1961.” Meaning, they predate even me.

With the goal of having at least a drink, and probably a whole meal, at each of these, we loosened our belts and strapped ourselves into the gastronomical time machine. Here’s what we found:

Following the repeal of Prohibition in 1933, many restaurants added alcoholic  beverages and music and dancing to their food service. One of these local restaurants, opened in 1931, was the Cho Book You restaurant in North Park, which featured “dine and dance” and meals served in “exclusive booths.” Playing upon the popularity of “exotic” Chinese food, in 1935 the proprietors remodeled the façade (advertised as “new attractive oriental front”) and changed its name to Pekin Café. 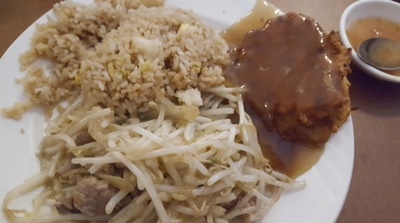 With old-school Chinese food this consistently good, it’s no wonder that the oldest Chinese restaurant in town has been serving San Diegans for almost 90 years. Wikipedia tells me that, while chop suey is widely believed to have been invented in America by Chinese Americans, anthropologist E. N. Anderson traces the dish to tsap seui (“miscellaneous leftovers”), common in Guangdong province, where many early Chinese immigrants to the U.S. are from. Add stir-fried noodles and it becomes the Chinese-American chow mein—literally, “fried noodles.” 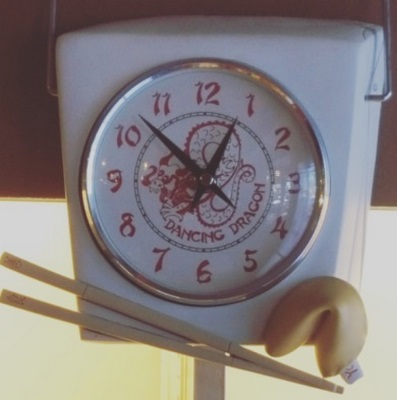 We had the pork chop suey plate that came with old-school egg foo yung (a dish that,  as early as the 1930s, was created by Chinese chefs in the U.S., and consists of a pancake filled with eggs, vegetables, and meat or seafood, covered with brown gravy), and fried rice; followed by the House chow mein: bean sprouts, celery, napa cabbage, onions, peapods, water chestnuts, and mushrooms; and chicken, bbq pork, beef, and shrimp. These dishes would go on to become a stereotypical staple of Chinese-American meals.

The food here was so good, so fresh, we actually visited twice, and both times were served by one of the friendly descendants of the original owner. (Author’s note: Since this was written, the Pekin’ Cafe family decided that their tenure of ownership had reached the end. They graciously thanked the San Deigo community for their long patronage. We considered ourselves lucky to have had the opportunity to be part of a long tradition.)

Seriously, who in San Diego hasn’t heard of the Chicken Pie Shop (1938)? Though it’s moved at least twice that I know of, it still serves up delicious chicken

pot pies with sides of mashed potatoes, cole slaw, fresh-baked yeasty rolls, and “vegetable of the day.” And each dinner comes complete with a slice of pie for dessert as well. While there are other dishes on the menu (the grilled half chicken is worth a special trip), really, just get the Pie Dinner. 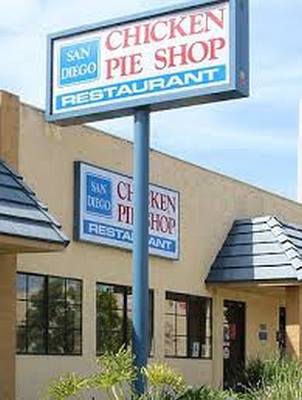 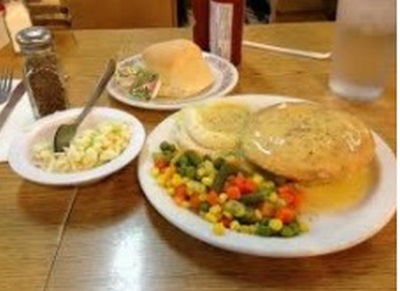 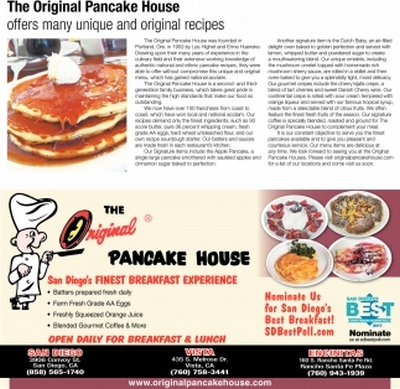 One morning’s breakfast time found us at The Original Pancake House, a chain founded in Oregon in 1953. Okay, so it’s not San Diegan, and it’s a chain. Whatever. Anyway, very generous (and delicious) breakfasts, served with friendly efficiency. A bonus for us was that our table was next to the open doorway to the kitchen, where we could watch this finely tuned machine churn out breakfast after breakfast, like clockwork.

Red Fox Room (1959). As a child, I remember seeing the neon sign for this place every time we drove into Hillcrest on El Cajon Blvd. 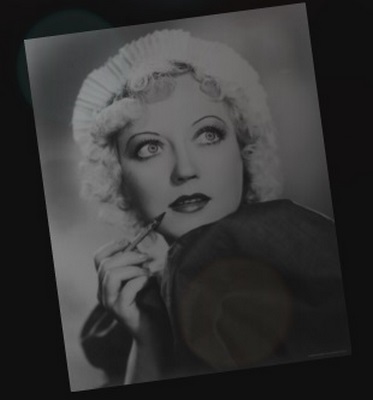 It looked so sophisticated, so grown up, so, well, Rat Pack (remember, this started when I was about five) that its mystery has stayed with me all these years. So when we pulled open the heavy door and entered its dimly lit interior, I couldn’t wait to see what was inside. To be honest, it was part letdown, part super-cool.

The super-cool part is that some of the décor in the Red Fox Room dates from around 1560—apparently it was part of an inn in Surrey, England, and brought to California in 1926 by Marion Davies, actress and long-time mistress of William Randolph Hearst. The Tudor-era building was dismantled, shipped to Los Angeles, and completely rebuilt to form her beach house,

which she called her “Ocean House.” During the 1950s, the house was sold and the pieces—consisting of Tudor paneling and an intricately carved mantelpiece—were put into storage until they were bought by and moved to the Red Fox Room. 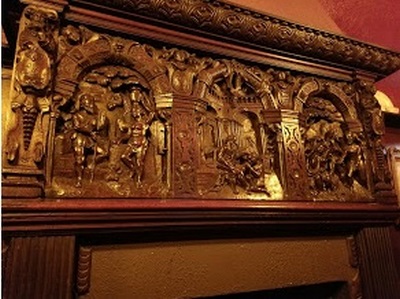 We dined on perfectly cooked steaks in the shadow of that mantelpiece, which bears the date of 1642. 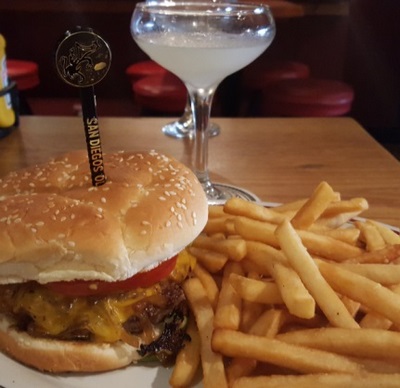 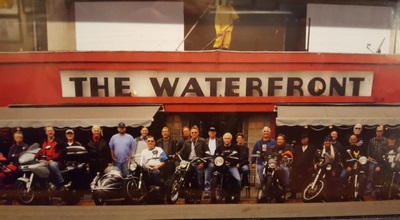 The Waterfront Bar & Grill has been a fishermen’s hangout since 1933, and boasts the longest continually held liquor license in town. We had some expertly made cocktails and a couple of burgers, just right for this slightly down-at-heel pub. The recent renaissance of San Diego’s Little Italy has improved the prospects of this bar, and it’s packed on weekends, though it’s a little cleaner, a little less seedy than I remember it when I used to hang out here in the 80s.

in the grounds of San Diego’s municipal golf course just outside Balboa Park. This café boasts the best view in town; the food is just okay, but the mimosas are generous, the service fast and very friendly (this is San Diego, after all), and it’s now on my list for a must-visit whenever we’re in town. 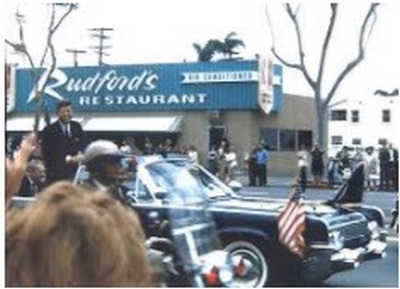 Rudford’s (1949) was the quintessential San Diego 24-hour diner on Old Highway 80, called by locals “The Boulevard,” and now a popular LGBTQ hangout. Go there for breakfast, grab a seat at the counter, and order a cup o’ joe.Then step outside and around the corner to pay your respects to President Kennedy (remember when we had real presidents?), whose motorcade passed by here. A life-size mural of the event now decorates the west wall.

Come early on a Friday night to the kitschy Turf Supper Club (1950) in Golden Hill, to guarantee a table and enough space on the grill for your meal. 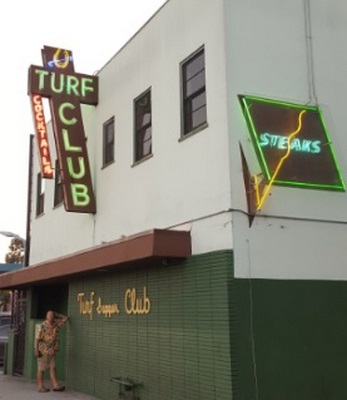 Yes, here you cook your own steak (or chicken, burger, or kebab) on the big grill set in the middle of the dining room. 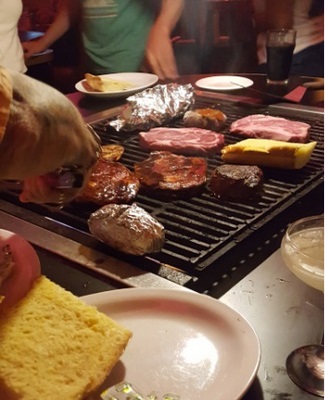 at least ours were, expertly cooked by Ben—and cocktails are generous, served up by friendly (again, San Diego) staff. The baked potatoes were a little underdone, and the grill can’t really fix that. But there’s a piano bar on Sundays, and if you’re under 30, this is a happening place—we were the oldest people in the room by at least 20 years. Bonus: The whole place is 21+ only.

offers French-inspired dining with the surf crashing against the windows right next to your table. 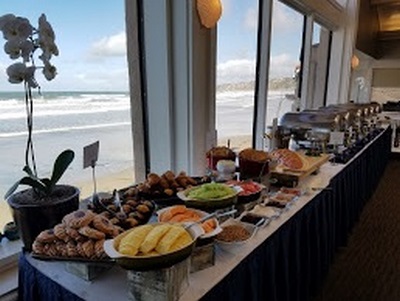 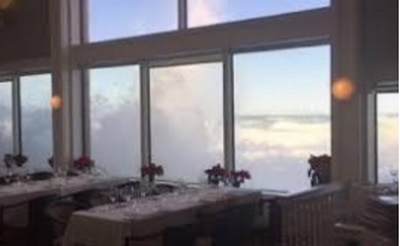 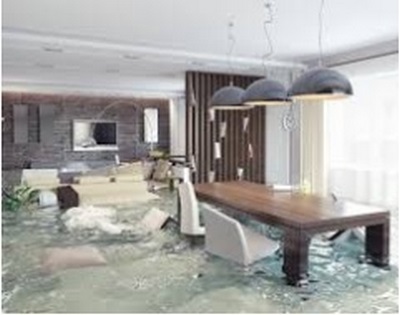 As a kid, I remember hearing that “the Marine Room is closed because of flooding,” but it looks like they figured out how to prevent that AND make an attraction out of it.

The Sunday breakfast, timed to coincide with high tide, was generous and delicious (chocolate-stuffed French toast, anyone?) and we enjoyed it in excellent company: our friends Kira & Todd, who flew down from the Bay Area, and Nancy & Brian, local pals.

We did note, however, that the amount of botox in the room made a curiously contrasting counterpoint to the young surfers and swimmers just outside the windows.

One evening, we decided to see a movie all the way out in El Cajon, and Wong’s 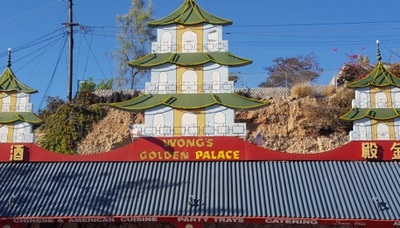 (1966—sorry, a bit out of the timeline, but close) was on the way. I looked forward to the Island of Flowers signature dish, and tiki drinks and the Signature Wong Cup from the Dragon Room bar. Alas, alas, they’d had a fire just a few weeks before, and only the bar was open (luckily the koi pond survived). 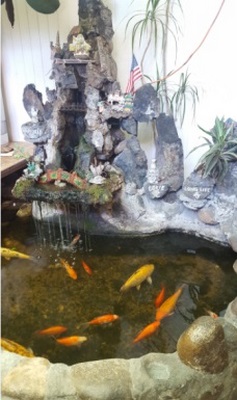 One uninspired cocktail later, we were on our way to the movies. 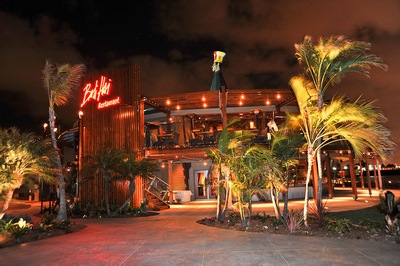 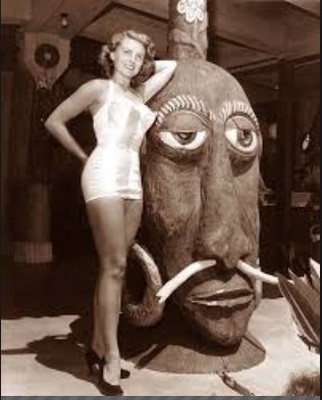 If you want spectacular views of San Diego Harbor and the downtown skyline, this is the place to come.

Signature cocktails include The Zombie—guaranteed to make you move like one—and the Mai Tai, a pure alcohol concoction that a running-total neon sign informs us over 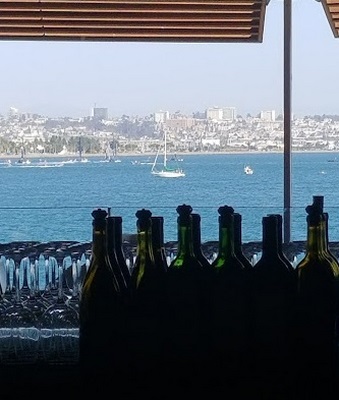 two million have been served just in 2017. Warm open-air breezes make this a great location for just sitting and staring out at the view; time absolutely zooms by. Oh, and don’t miss the kinda creepy, giant tikis featured throughout.

On our penultimate morning in San Diego, I wanted to 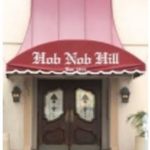 So, up at the crack of dawn, I left Ben sleeping while my parents and I went out to seek some history for breakfast. While the Hob Nob specializes in American comfort food, I ordered the slightly exotic quiche of the day and a mimosa, and fondly fancied myself genteel. Great coffee, too.

While these two places haven’t been around for anything like 50 years, they deserve mention here as being just, well, fabulous.

“Give me a hot dog—and make it Snappy!” 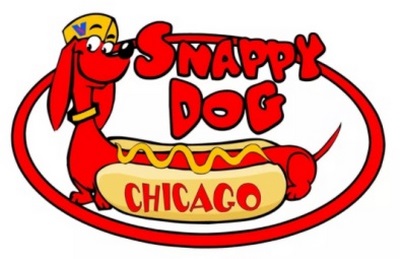 Windy City native Ben discovered that this famous Chicago eatery has recently opened a location here in San Diego, and we trekked out to the San Diego State University area to find it. Here you can get authentic Italian beef (wet, dry, or “semi-dry”), mozzarella sticks (aka Snappy Stix), and, of course, the signature Snappy Dog—the Chicago-style, original Vienna hot dog with mustard, relish, chopped onions, pickle spear, tomatoes, sport peppers, and celery salt. Why Snappy Dog? Because it snaps when you bite it.

La Lucha Libre. Love Mexican wrestling? Addicted to Mexican wrestling-themed B movies (that rival Bollywood for exciting—and confusing—drama)? Never even heard of it? Well, the folks at La Lucha Libre not only have, they celebrate it at this mind-bending taqueria on Washington Street. While it’s just your typical taqueria for the most part—except for the Mexican wrestling paraphernalia and continuous-loop movies—if you plan ahead you can reserve “the Champion’s Booth,” and be treated like the champion you are. The booth is all about bling, and operates under the premise that “too much is never enough.”

Once seated, you are served a variety of 10 different salsas and (my favorite) a ringside-type bell to announce your every gastronomical desire: the moment you ring, a server rushes out attend to The Champions’ current whim. It’s the only table in the place that provides waitstaff. And, of course, a choice of masks. Let the Taco Smackdown begin.