Ever since I read about the murder of Archbishop Thomas Becket at the hands of four of King Henry II’s knights, I’ve been intrigued by the story. These two powerful men, one a king, one an archbishop, were best of friends—bosom buddies, in fact—and yet, thanks to politics and religion, they ended up at odds. Fed up with what he perceived as Becket’s intransigence for putting the church above the king, one day Henry, in one of his famous rages, exclaimed, “Who will rid me of this meddlesome priest?!” (Some sources say “troublesome.”) Four of his knights: William de Tracy, Reginald Fitzurse, Hugh de Morville, and Richard le Breton took up the charge. They traveled to Canterbury, challenged Becket, and murdered him in cold blood near the altar in Canterbury Cathedral on December 29, 1170.

One of the cathedral monks observed the attack first-hand—from the safety of a hiding place, let it be said—and later wrote,

The murderers [cried], “Absolve and . . . restore their powers to those whom you have suspended!”

Becket answered, “I will not absolve them.”

“Then you shall die,” they cried, “and receive what you deserve.”

The knights tried to pull him away from the altar where he stood, but he held fast. Scarce had the martyr bowed his head . . . than the wicked knight leaped upon him suddenly and wounded [him], cutting off the top of [the] crown [of his head]. Then he received a second blow on the head but still stood firm. At the third blow he fell on his knees and elbows, offering himself a living victim, saying in a low voice, “. . . I am ready to embrace death.”

The last knight put his foot on the fallen Becket’s neck and, with the tip of his sword, scattered Becket’s brains and blood over the pavement, saying to the others, “Let us away, knights; he will rise no more.” 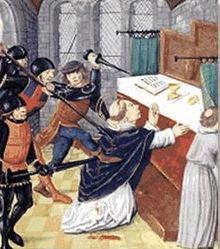 The murder of Thomas Becket, from a contemporary manuscript

These knights were never punished for their deed, fleeing to Scotland at the suggestion of King Henry himself, who did confiscate their estates. The four returned to England only a short while later, however, and their lands were restored to them. Four years later, Henry did a form of penance, donning sackcloth and walking barefoot through Canterbury, enduring a flogging by the cathedral’s monks. He then spent the night at Becket’s tomb.

Within days, perhaps even hours, of Becket’s murder, the monks at the cathedral began telling stories of miracles taking place at the site of the killing. It didn’t take long for the Church to canonize Thomas, and pilgrimages to his tomb began. The hordes of pilgrims filled the coffers of the cathedral for hundreds of years, buying relics like small vials of Becket’s blood (actually the blood of geese or ducks).

Pilgrimages were very popular in the Middle Ages. They were a way to have your sins absolved, be healed or increase fertility, or, more accurately, just get away from home for a while and enjoy travel to a distant city in the days when traveling more than a few miles from home was a rarity. Geoffrey Chaucer (1342?–1400), known as the Father of English Literature, wrote a story centering around a group of pilgrims who meet at a London tavern (the Tabard Inn, now demolished, alas), and decide to travel to Canterbury together. Along the way, they take turns telling tales to keep themselves amused, and it is these stories Chaucer tells in The Canterbury Tales. (If you haven’t read them lately, by all means, get a modern translation and dig in—it’s better than you remember from sophomore English.) The Knight, the Wife of Bath, the Summoner and the Pardoner, the Miller, the Monk and the Prioress—these characters come to life for me as no other characters in literature until Shakespeare.

It was with these tens of thousands of pilgrims, spread out over hundreds of years, in mind that I had always wanted to retrace their steps from London to Canterbury. The very landscape in England narrates its own history; you can feel its bones and stories under your feet. I had long wanted to feel closer to the people who walked the miles in hardship on foot or rode in relative ease on horseback. At about 60 miles, and no major hill climbing, we knew we could do it in a few days, and as summer turned to autumn in 2018, we got ready to set out. No horses.

But, we were also spending several months in England that fall, and had enough luggage for our multi-season stay—we couldn’t carry all that. Some things are so easy in England: two emails, a talk with the concierge at our London hotel, and our luggage would meet us at our hotel in Canterbury a week later. Almost as easy and inexpensive as the door-to-door laundry service, also available in London. I’ll say it again: a civilized country, sized more for the individual than the corporation.

The day before our pilgrimage began, we spent the afternoon in nearby Borough Market, in the Borough of Southwark, south of the River Thames. Borough Market is London’s oldest food market, serving the people of Southwark for over a thousand years. Let me say that again: over a thousand years. As their website proudly states, “A place where food is talked about almost as enthusiastically as it is consumed.” Borough Market is a riot of colors, smells, and tastes, but these pictures show it better than I could ever describe it: 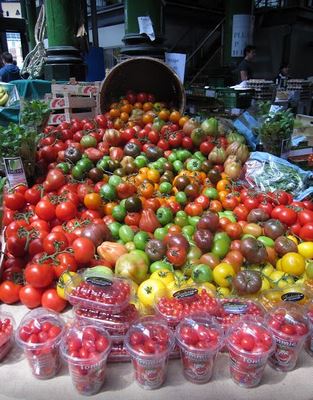 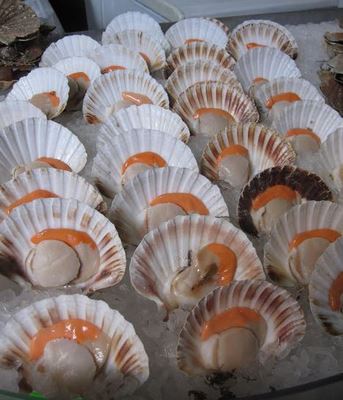 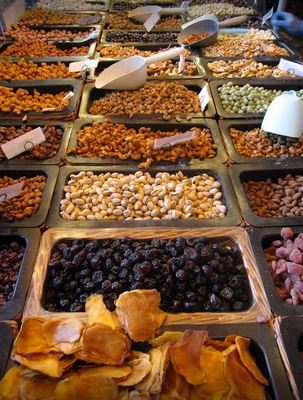 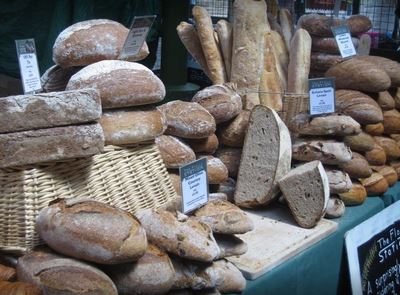 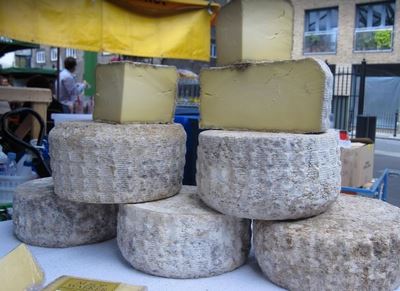 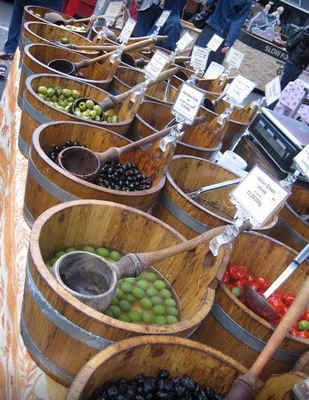 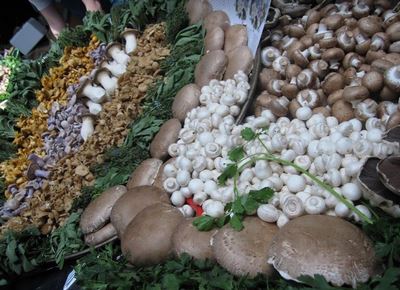 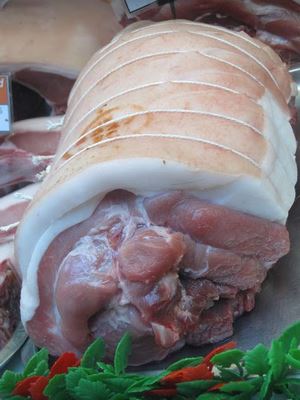 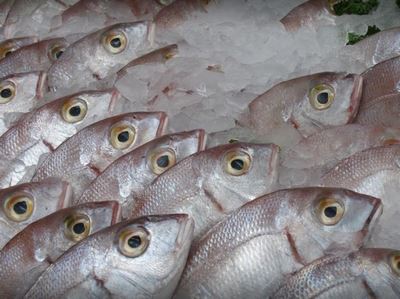 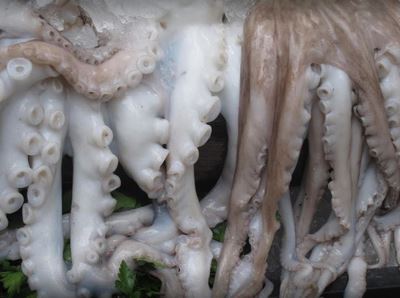 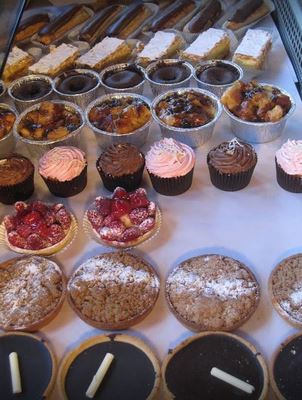 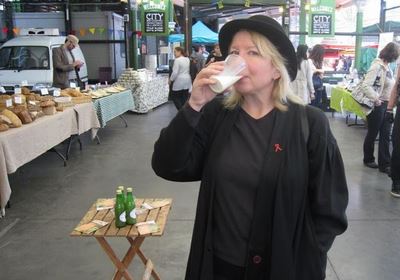 While it’s impossible to discover exactly when Borough Market came into being, the best-guess date is the early 11th century, since it was already well-known in 1014. Southwark Borough’s position at the foot of the c. 990 Roman-built London Bridge was partly to bolster London’s defenses against raiding Vikings.

The market is first mentioned by the unforgettably named Snorri Sturluson (1178–1241), Icelandic historian, poet, and politician, in his collection of sagas. He relates the story of how, in 1014, attackers pulled London Bridge down, using strong cables and the force of the current. The passage begins: “First they made their way to London, and so up into the Thames . . .. On the other side of the river is a great market town called Southwark . . ..”

As London grew, Southwark tried to guard against being subsumed into the expanding metropolis. However, charters in 1444 and 1462 made it clear that Southwark was not a separate city, but part of London itself. These charters, perhaps as a concession, added the right for Southwark to hold a three-day fair every September. The Southwark Fair came to be known as one of the most riotous events in London’s calendar. 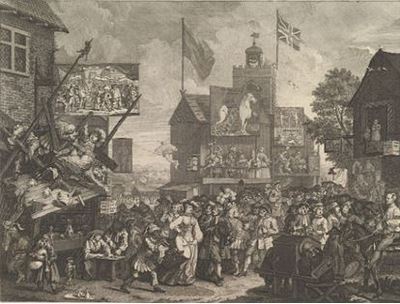 By the 16th century, Southwark was already famous for its theaters, gaming dens, bull- and bear-baiting, and brothels; and as the haunt of confidence men, prostitutes, thieves, and—horrors!—actors. The Cross Bones graveyard holds the remains of up to 15,000 “undesirables”; mostly prostitutes and their children who died, penniless and forgotten, in the years of religious hypocrisy when church officials owned and profited by the very brothels that exploited these women. It later became a paupers’ graveyard for the parish, and closed in 1853. 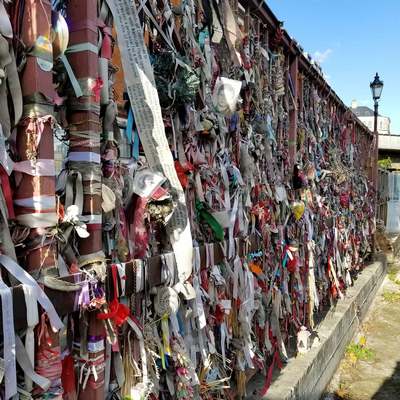 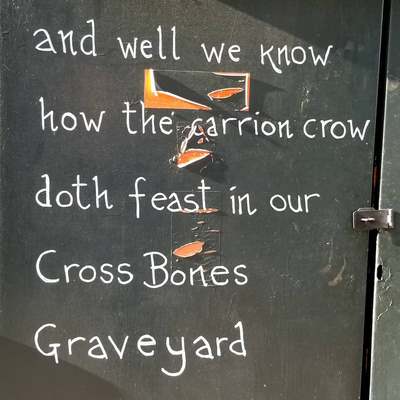 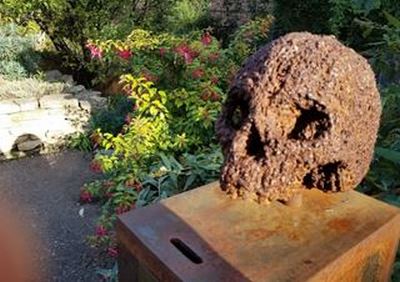 We stopped for a pint at the nearby George Inn, which was an inn when Shakespeare was working nearby—I like to think he had a pint or two there after the show. The first mention of the George as an inn was in 1543, though it clearly existed long before then. It is London’s last remaining galleried inn, which means it has open balconies, or galleries, running the length of the building and looking down on the courtyard below. These galleried inns were often used for theatrical productions in the Elizabethan age. 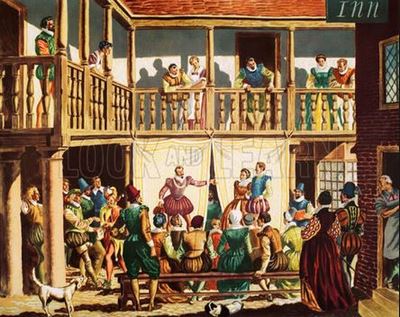 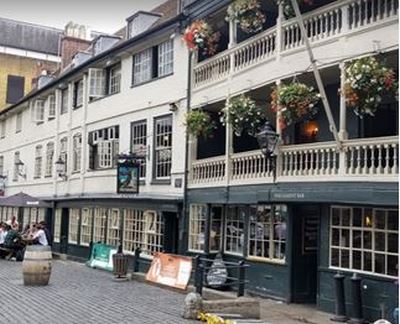 In its later years, The George was nearly demolished in its entirely, but luckily some of its original building remains. A pint or two here is still a lovely way to while away an afternoon, where the galleries now look down on the umbrellaed tables that shade our pints from the afternoon sun. All the remaining galleried inns in London were demolished in the 19th century.

We paid our final respects (for now) to Shakespeare’s London on the small street near Shakespeare’s Globe Theatre that houses the remnants of The Rose playhouse.

The Rose Theatre was built in 1587, the first theater built on Bankside, by Philip Henslowe, a local businessman. In 1592, Henslowe started keeping an accounts book, more a general notebook than sticking strictly to accounting. In this same year, his step-daughter married the famed actor, Edward Alleyn, who then became associated with The Rose. Later, Alleyn founded Dulwich College, where many of Henslowe’s account books survive—most importantly, the list of plays staged at The Rose, along with details of costumes and props. One of my favorites in the account books is the fantastically mysterious “robe for to go invisible.” (Note to self: get one of these.) The success of The Rose soon led to the building of other theaters on Bankside, among them the Swan in 1595 and the Globe in 1599. However, it appears that The Rose had fallen out of use by 1603, and was abandoned by 1606. 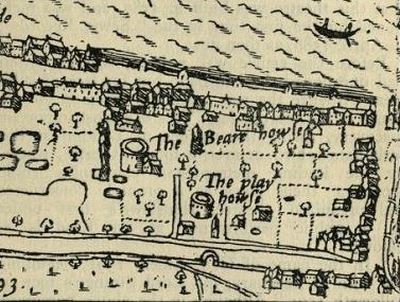 The site of The Rose was rediscovered in 1989 during an excavation to build a new office block. A campaign was quickly raised to “Save The Rose,” supported by the public and many scholars and actors, including the dying Lord Olivier, whose last public speech was in support of The Rose. Thanks to the recent efforts of such stalwart patrons as Dame Judi Dench, Dame Janet Suzman, and Dominic Dromgoole, among others, The Rose is experiencing a rebirth, staging performances and events much as it did over four hundred years ago.

Next up: Ben and I finally start our pilgrimage!