I’m sitting 20 feet off the beach on the coast, just north of Ventura, California, listening to the hypnotic whoosh of wave breaks on the shore. Glancing to my right, the silver rear end of the Airstream and its panoramic windows frame an infinite horizon to the west. This would be the land’s end of the westward expansion in the 19th century: “Go West young man, go West.”

The eye-squinting brilliance of aluminum reflecting the sun’s rays against the azure blue sky, and sand-muddied purple turbulent waters, is dulled somewhat by microscopic coatings of regional terroir layering its skin at 60 mph and three quarters of a thousand miles.

Several times in nearly 4,000 miles we have sought out a truck and car wash to wipe clean our badge of nomadic wanderlust and return to that iconic marketing and public display look. Our first being the Blue Beacon, on the outskirts of Las Vegas, having just dropped out of the high desert down deep into the 104-degree heatwaves of this manmade oasis of sin and pleasure. Our rig and truck stands an imposing 50 feet in length solo, but next to semi tractors and trailers is diminutive and tinkertoyesque (may have created a new word?!). We fell into the queue to a huge building with two bays 30 feet high and 20 feet wide, and slowly worked our way closer to the maw of a dark opening from which we could hear the shouting of many men in the throes of battle with the machines contained within. Our turn arrived, and we were instructed to pull into a mob of about 10 to 15 men wielding six-foot water-blasting wands of tremendous power and multiplicity, from a trickle of soap, to wash and soap mix, to rinse and waxy chemical treatments. 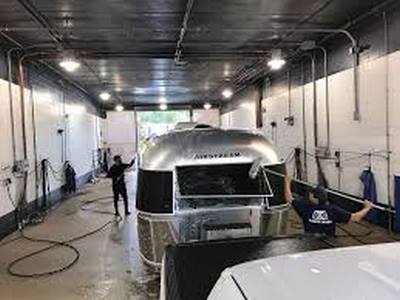 The sounds of the water blasts were deafening as they echoed through the semi darkness within the foggy mist, antidoted by earplugs. A team leader shouted commands and the men moved in a syncopated dance around us, their camaraderie formed by countless hours’ labor in this sound-deafening sauna. Their labored barks and yells took on the rhythm of the famous “field hollers” which characterized the laboring African American cotton pickers of the South, and which developed into the Blues we know today.

There is something quite pleasurable in watching your vehicle come clean through the movie screen of your front windshield, yet the time to move out into the blinding light and heat arrived with a wave from our team leader and a beckon toward the pay station. I slid a respectable tip into an underling’s hand and received in turn an additional tire sidewall polish. We were “Ready for our close up, Mr. DeMille!”

Arriving in San Diego, it was time for another round of ablution, but this time, our truck went solo as nothing was available for the complete ensemble. We negotiated a hand wash over the quickie machine in-and-out option, and sat in the waiting area. This is a perfect environment for people-watching; they come in and then we try matching their image and personalities to their cars when they drive out. Time elapsed and we became keenly aware that the waves of customers passing through the car wash event in front of us were multiplying. Yes, we paid for a hand wash…and we waited. The minute hand of my watch rounded the dial, and I stepped out to spy the location of our truck now parked in its own bay, with one person diligently laboring within. I reached into my wallet and with a grin mentioned to Ruth that for every ten minutes of this kind of labor, I would add another dollar to the tip. That wallet unzipped three more times and this time with a wry grin I said that certainly the peak of the curve had been reached and that as each ensuing ten minutes passed, I would subtract a dollar; but it just couldn’t be the right thing to do…

Fifteen minutes passed, and to relieve a sore butt and stretch out a tired back, I surreptitiously walked out to determine the cause of the delay. I returned shortly to exclaim that it appeared that they were color matching the paint that they had wiped off in their washing diligence during the past hour and a half. Well, I was close to correct as shortly our beast arrived and we had to pull out our sunglasses to dull the glare. I don’t believe we have ever seen such a perfect finish on any truck, perhaps not even when it was presented to us at the dealership. Our detailer received his tip—a $5 bill with a thick wad of ones artfully wrapped within—with a gracious smile, and we set off to hopefully delay the inevitable return but, again hopefully, not with the same timeframe. Someday a dirt repellent surface will be invented, but perhaps not too soon to keep a labor-intensive, yet honorable and immediately gratifying, profession from dying away.